Former Bellator flyweight title challenger Alejandra Lara returns next month at Bellator 255, where she’ll take on Japanese standout Kana Watanabe. The April 2 date is Lara’s first in over a year. But while she was out of the cage for all of 2020, “Azul” stayed busy, appearing on competitive reality show Exatlon to great success.

In 2021, she not only returns to action, but has also landed a gig behind the desk, providing commentary for Naciones MMA, which launches their inaugural show on Friday, March 19. The event will stream on Facebook Live.

“That’s something that I was looking for,” Lara told Cageside Press recently in regards to her move to commentary. “I like to develop that part of this circle, of this career. Because I like to talk, I feel comfortable with cameras and everything, and I need experience in that. So this is that opportunity, and I feel very grateful for that. I feel ready.”

While her role as commentator may change how she watches (and listens) to fights, Lara pointed out that the biggest keys to success on-air are to “be natural, to describe what’s happening, and to be yourself. That’s the natural way to do it. Let’s see how it goes. I’m obviously studying the fighters to do a good job, to be informative. I think that’s the important part. And also the experience I have in MMA should help me.”

Lara has built up a two-fight win streak since a loss to Juliana Velasquez in 2018. Velasquez would go on the become Bellator flyweight champion, and a rematch potentially awaits down the line. Asked about what separates Velasquez from others opponents, Lara replied by saying that “I have to say she’s one of the most strongest fighters that I’ve faced, but also is very careful when she’s fighting. She waits for the perfect moment to counter. Her base is very strong, it’s hard to take her to the ground.”

“She’s one of the stronger fighters I’ve faced,” Lara reiterated.

It’s not Velasquez, but the unbeaten Kana Watanabe, that Alejandra Lara is focused on these days however. The match-up came as a bit of a surprise, given Lara’s placement in the division, and the fact that RIZIN’s Watanabe only just recently officially signed with Bellator MMA.

“I was thinking the same. I was speculating obviously. But when I saw Kana’s career, she’s undefeated til now. So it’s also a good match,” said Lara. The pairing also gives her the opportunity to break an impressive undefeated streak. “I feel it’s a good match-up for me, and to keep my top [spot] in the rankings.”

What does she need to watch out for from Watanabe? One area stands out. “Definitely her judo,” Lara noted. “She has a very strong judo base, she takes all [her] opponents to the ground very easily. So of course that’s what we’re working on, [for] the game plan, to avoid that.”

Watch our full interview with Alejandra Lara ahead of Bellator 255 above! 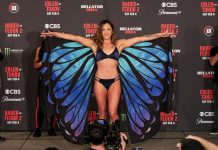 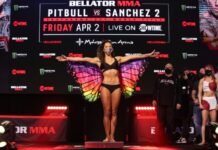 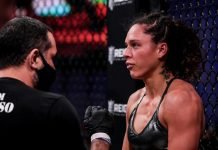