Ashley Yoder has spent a great deal of her professional career on the biggest stage of them all. Having been a pro for less than two years, she made it onto the Ultimate Fighter and was soon fighting the likes of Mackenzie Dern and Angela Hill in the UFC. While her record might not be as spotless as some other fighters in her division, over half of her professional fights have come on the biggest stage of them all.

Despite the difficult road that she has faced, Yoder isn’t one to dwell on those past fights. She’s never been one to want to smooth out those bumps in the road with rematches.

“There’s people rallying for rematches harder than I ever have. I’ve never really thought about getting those rematches,” Yoder said. “I just kind of brushed off whatever happened, and focused on the new task at hand.”

Of course, this seems like an odd statement being as she is now booked in the first rematch of her career. This weekend she faces off with Angela Hill in what will be the second go-round of their 2017 match-up (the first of which was won by Hill via decision). However, Yoder points out that she is not necessarily against rematches – because at the end of the day, she’ll do what the UFC wants.

And while she’s never been in search of a rematch, now that it is on the horizon, she enjoys a lot of the preparation that goes into fighting someone that she’s already seen before.

“It’s kind of a cool feeling because this is all new for me – to be able to step back in against someone I’ve already felt their power, I’ve already felt those kinds of things,” she said. “It’s a bit of mental imagery of being able to be there already and know that there’s only so many things that we’ve changed since our first fight.”

Yoder, as well as Hill, has progressed significantly from their first bout. That too excites Yoder when she thinks about the match-up. Although some things do change, she feels that some things will be the same.

“Our styles are our styles – it’s kind of who we are,” she stated. “I’ve felt really good about the growth on both sides.”

You can catch the rematch this weekend as part of the UFC Vegas 21 main card on ESPN+.

You can hear the entire audio of this interview at 2:23. 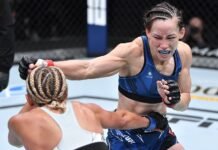