A pair of heavyweights will be looking for their first UFC win in June.

MMA DNA was first to report that two-time Dana White Contender Series vet and Ultimate Fighter alumni Josh Parisian will fight Roque Martinez at a yet-to-be-announced UFC event on June 19. Sources subsequently confirmed the fight to Cageside Press, and Parisian would later confirm the fight on his Instagram.

Parisian (13-4) was unsuccessful in his UFC debut in November when he lost a unanimous decision to Parker Porter at UFC Fight Night: Smith vs. Clark. Before his loss to Porter, Parisian was on a six-fight win streak. Two of those wins came in 2020, prior to his octagon his debut. He would knock out Marcus Maulding in the first round to earn another invite to Dana White’s Contender Series, where he would again win in the first round and earn a UFC contract that had long avoided him.

Martinez (15-7-2) may be fighting for his job when he faces Parisian. He lost twice in 2020, although both defeats were on short notice. Martinez, a RIZIN alum, fought Alexander Romanov in his UFC debut and two months later would face Don’Tale Mayes. The Guam fighter will finally have a full training camp and will be looking to get his first win in the big show.

The only other fights reported so far for the UFC’s June 19 card are Virna Jandiroba vs. Kanako Murata and Matt Brown vs. Dhiego Lima. 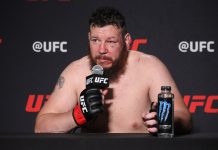 UFC Vegas 57: Josh Parisian Not Proud Of Win, But Feels He Finally Belongs In The UFC