On Tuesday, Brazil’s Combate was first to report that Modafferi and Santos would face off at the UFC’s May 8, 2021 Fight Night event.

The only blemish on the record of Taila Santos came in her UFC debut against Mara Romero Borella.

Modafferi (25-18), meanwhile, is one of the longest-serving veterans of women’s MMA at this point, especially in the UFC. A pro since 2003, “The Happy Warrior” is entering her 44th bout — and you can add her Ultimate Fighter exhibition fights on top of that as well. Since returning to the UFC in 2017 thanks to the introduction of the women’s flyweight division, Modafferi has been trading wins and losses — most recently suffering a setback against Viviane Araujo.

The UFC’s May 8 card does not have an official location, venue, or broadcast plans set. The card currently consists of the following match-ups: 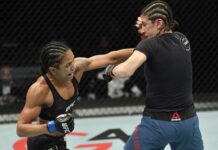 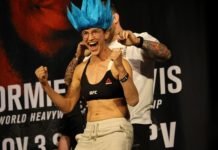