For starters, her UFC Vegas 20 fight with Mayra Bueno Silva will be her second during the pandemic. “I’m kind of used to it now, used to being here. I know what to expect, and I’m just excited for Saturday night,” De La Rosa (11-6) stated during Thursday’s virtual media day to promote the event.

It’s more than just a couple of fights, however. Back in December, De La Rosa had been expecting to face off with Taila Santos. Instead, word came that her husband, Mark De La Rosa, also a UFC fighter, had tested positive for the virus.

Mark was one of Montana’s corners, of course. That led to a second COVID-19 test, and the unfortunate cancellation of her bout with Santos. In the end, both partners wound up sick with the disease. “I got it a few weeks after him. I didn’t really have any symptoms, I just had like a headache. He had a fever, and a headache for a couple days,” Montana recalled.

Santos was eventually rebooked against Gillian Robertson later that month. The UFC, meanwhile, initially suggested another fight for Montana De La Rosa as well — something she was a little surprised by, apparently. “I don’t know if there’s a point in scheduling me, when I’m probably going to test positive,” she recalled telling the UFC. Which is exactly what happened.

De La Rosa is glad, however, her former opponent Santos was given a fight. As for her family, “we had to deal with COVID going around the household for that month.” But she’ll now return, looking to bounce back from a loss to Viviane Araújo, another tough Brazilian fighter.

That’s what De La Rosa has here again. “I think she’s a super-tough Brazilian. She has two really good wins in the UFC with some arm-bars,” she observed of her opponet. “She’s really good on the ground. I’m just excited to test my skills against her, and show everybody on Saturday.” 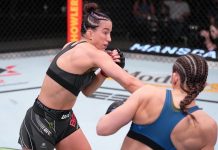 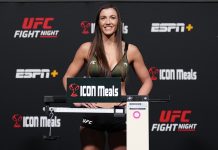