Israel’s Levy (6-0), who earned a submission win over Shaheen Santana on Dana White’s Contender Series last year, will be welcomed to the octagon by another former LFA standout, Austin Hubbard (12-5).

The bout, first reported by MMA Junkie, is expected to take place in the lightweight division. Both Levy and Hubbard subsequently confirmed the report.

Hubbard will enter the fight looking to get back in the win column following a loss to Joe Solecki at UFC Vegas 7 last August. Since entering the UFC in 2019, Hubbard has traded wins and losses, posting a 2-3 record thus far.

Levy, meanwhile, has been perfect through his professional career to date. The Syndicate MMA athlete has proven to have a dangerous ground game, with half his wins coming via submission.

No official venue, location, or broadcast plans have been announced for the UFC’s April 17 date. The card is expected to be headlined by a key fight in the promotion’s middleweight division. That main event will see former champ Robert Whittaker throw down with recent title challenger Paulo Costa.

Thus far, the following fights have been reported for the event: 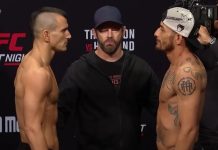