COVID-19 continues to wreak havoc on the UFC’s fight plans, as it strikes again ahead of this weekend’s UFC Vegas 20.

On Monday, bantamweight Raoni Barcelos and welterweight Randy Brown took to social media to announce they are off of this weekend’s UFC Fight Night: Rozenstruik vs. Gane card.

Barcelos (16-1) posted on social media, “Unfortunately I tested positive for COVID 19 and will be out of that card next February 27th, soon I will be in action again !!” The Brazilian also posted a video addressing the situation (in Portuguese) in the same message.

Barcelos is undefeated in the UFC, winning all five of his fights, and is currently on an eight-fight win streak. He was originally scheduled to face Raphael Assuncao however, an injury pulled Assuncao from the match-up. UFC newcomer Marcelos Rojo had just stepped into the bout on short notice. There is no indication at the moment as to whether the promotion wants to keep Rojo on the card.

Exciting welterweight Brown (12-4) posted his own bad news on social media this morning, writing “Hey y’all, I regret that I have to announce this, but I’m out of my fight this weekend with Alex Cowboy [Oliveira]. Due to COVID 19. We’re working on getting the bout rescheduled.”

Brown was scheduled to fight Alex Oliveria, with both fighters looking to get back in the win column. Again, there is no indication at the moment if the promotion wants to keep Oliveria on the card.

UFC Fight Night: Rozenstruik vs. Gane now looks like this: 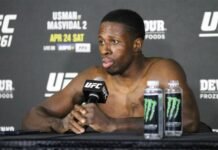 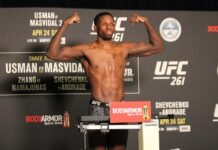 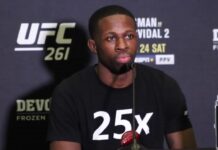 UFC 261’s Randy Brown on Cowboy Oliveira: “A Cornered Animal is Usually the Most Dangerous Animal”