The amateur scene often gets overlooked, but it’s worth keeping an eye on some of the top talent, who could some day make an impact on the biggest stages of MMA. With that in mind, we’ve got five more amateur prospects to watch out for in 2021!

If you haven’t checked it out, the first part of our Amateur MMA Roundup is available right here.

Fighting out of Lewisville, Texas, US
Fighting currently at the age of 24
Training out of George Prevalsky Muaythai and Boxing
A record of 5-0
Four finishes (4 KO/TKO’s)
Combined opponents’ record: 8-5
Best win: Jacob James (4-0)

Franklin is a tank and shows it every time he steps in the cage. Four of his five wins have been by KO/TKO and all were emphatic finishes. All his fights have been under the LFA banner so it would be nice to see him stick there when he goes pro. From the start, Franklin will come out guns a blazzing throwing nothing but 100% power.

Franklin has really good hands, which all of his stoppages can be credited to. He will let his hands go attacking the body and head and at any time can put the fight away. As a flyweight, he has the speed, the athleticism, the explosiveness, and he has big knockout power for the division.

Fighting out of Virginia Beach, Virginia, US
Fighting currently at the age of 24
Training out of Team Lloyd Irvin
A record of 6-0
100% Finish Rate (6 KO/TKO’s)
Combined opponents’ record: 20-14
Best win: Zach Krapf (4-1)

Willingham is someone I’m fairly confident has a bright future. Willingham is first and foremost a striker. Of what I’ve been able to watch, he has perfect takedown defense. He’s done a good job making guys pay when they shoot as he defends and lands shots of his own. Willingham does have an underrated ground game as it’s put in the review mirror behind some excellent work on the feet.

Willingham is a 6’1″ fighter that knows how to use his length to his advantage. Being a distance fighter he’s excellent at fighting on the outside with long punches including a slick one-two. He uses a lot of kicks and mixes it up nicely. Willingham is very dangerous on the feet with his hands, kicks, knees, athleticism, explosiveness, and his shot-selection. I believe he’s the real deal.

Reyes is a big welterweight standing at 6’2″. From what he has shown on the feet, he is super aggressive, has good hands, and seems to have good countering ability. Although he has two TKO’s on his record both of those come by the way of ground and pound.

Reyes has proven to be a good wrestler. So far, he has timed his entries very well. He’s been able to just rush across the cage and bully other guys down. The work Reyes has done on the mat has been substantial. All his finishes have come by ground and pound and submissions. Reyes is all danger on the mat as he’s looked levels above as an amateur.

Fighting out of Vallejo, California, US
Fighting currently at the age of
Training out of Nobody MMA
A record of 4-0
1 Finish (KO/TKO)
Combined opponents’ record: (5-3)
Best win: Ian Masloff (4-3)

Seronio will confuse you as he fights with a taekwondo stance but it’s his wrestling that he goes to the most. He’s very light on his feet and that’s complemented his takedowns. He’s able to close a good amount of distance very quickly and behind a lot of feints as well. He’s tough to read. Seronio even has a few big emphatic takedowns in his career. On top, while he has good control he doesn’t produce much offense.

Seronio is a diverse kickboxer throwing a lot of sidekicks and an array of other flashy techniques. He’s also got good hands especially that right hand. If you dare to come in on him sloppy he has excellent timing on his counter striking. Only 4-0 so time is on his side and with a few adjustments he’s going to be an interesting prospect.

Fighting out of England
Fighting currently at the age of
Training out of Aspire Combat Sports Academy
A record of 4-0
2 Finishes (1 KO/TKO, 1 Submission)
Combined opponents’ record: 14-5
Best win: Kerry Isom (8-1)

Ditcheva is likely to run into a lot of women who don’t want to strike with her, and instead test her takedown defense. Ditcheva has an extensive Muay Thai background and a very successful one at that. She is a British Muay Thai champion and a member of the British team that won the International Federation of Muay Thai Amateur World Championships in Jönköping, Sweden. She’s also a three-time world champion.

So far her takedown defense has held up pretty well. You have to close the distance to try and take Ditcheva down but she will make life very tough in the clinch. She does excellent work staying busy with knees while defending wrists and landing while she’s framing off. At distance she will chip away with leg kicks, teep kicks to the midsection, and long strikes. Ditcbeva reminds me of UFC fighter Manon Fiorot comparing the fluidity and constant attack from all angles. Ditcheva has shown she can scramble well on the mat and has a submission base attacking a few subs in her career. In her last fight she won quickly with a RNC. Watch out for Ditcheva. 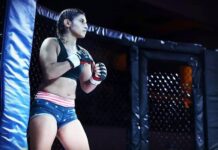 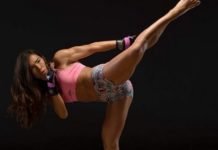