The UFC’s February 27 event is currently down a fighter.

Multiple sources familiar with the situation, speaking on condition of anonymity, have confirmed to Cageside Press that women’s strawweight Emily Whitmire has been forced out of UFC Vegas 20. Whitmire had been expected to face Sam Hughes on the Fight Night card.

The reason for Whitmire’s withdrawal was not disclosed. Hughes herself was a replacement fighter, stepping in for Hannah Cifers, Whitmire’s original opponent. It does not appear that Hughes will remain on the card.

Whitmire (4-4), 29, last competed in August, where she lost her second straight bout. The Syndicate MMA athlete was submitted via arm-bar by Brazilian Polyana Viana. Just over a year prior, Whitmire was submitted by Amanda Ribas at UFC on ESPN 3. Overall, the Portland, Oregon-born fighter is 2-3 inside the octagon. She holds wins over Jaime Moyle and Aleksandra Albu.

Hughes (5-2) is an LFA veteran who stepped into the UFC on short notice late last year. “Sampage” found herself in a tough match-up with veteran Tecia Torres at UFC 256 on December 12, with the bout ending in a doctor’s stoppage loss for Hughes following the opening round. The fight against Whitmire was to be her sophomore outing.

The UFC Vegas 20 card is headlined by a heavyweight match-up featuring Jairzinho Rozenstruik and Ciryl Gane. The event currently consists of the following bouts: 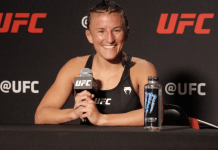 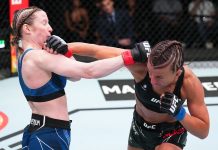 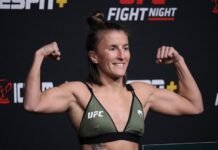 Sam Hughes vs. Elise Reed Added To UFC Vegas 55 on May 21