“The Nigerian Nightmare” surpassed George St. Pierre’s consecutive win streak in his defeat of Gilbert Burns. It was the third straight defense of Usman’s 170lbs title, and 13th straight victory inside the octagon. Unfortunately, his father was not in attendance to witness it.

“This one was a tough one, because obviously I couldn’t have him here, to watch this, because of the COVID,” Usman said, speaking to media outlets including Cageside Press at the post-fight press conference. “Plus, I didn’t want to cheat him of the experience. There’s something very special about a UFC fight, especially in Vegas. It’s not the same experience without 25,000 people screaming for you. I didn’t want to cheat him of that,  I want him to get the full experience when he comes to a fight.”

Kamaru’s father, Muhammad Usman spent a decade in prison on healthcare fraud charges, and has never attended any of his son’s UFC fights live as a result.

The UFC 258 main event was a tough fight for Usman for another reason. He and opponent Gilbert Burns “kind of grew in the sport together,” Usman noted. Burns was always someone Usman shared a common goal with. “We both wanted to be the best in the world. Obviously at two separate respective weights.”

Then Burns moved up, joining Usman at welterweight. Still, the champ had nothing but kind words for his vanquished opponent following UFC 258. “First and foremost, I want to say I’m proud of Gilbert. I’m very proud of him. Because a lot of people kind of wrote him off after he suffered that knockout at lightweight,” Usman pointed out. “But he recomposed himself. Something that I’m no stranger to, he recomposed himself. He got back on the horse, he moved up a weight class, and he tore through that division.”

“He deserved to be in there with me tonight, and I’m extremely proud of him for that,” Usman added. “And that’s part of the reason why this one was a tough one for me.”

Like Burns, Kamaru Usman had to adjust during the fight. Especially after being rocked in the opening round. “Anybody else in the division, they get caught with one of those hooks, they’re going to sleep,” he stated. “But I’m a champion for a reason. I recompose better than anybody.”

As with any big title fight, celebration is short-lived. The question of “what’s next” is on the tip of everyone’s tongue, and in the case of Usman following UFC 258, there were no exceptions. Interestingly enough, the champ floated the idea of a rematch with Jorge Masvidal, who he defeated last year at UFC 251. Masvidal has not fought since.

“That fight, he had a built in excuse. That’s the only reason he took that fight. We tried to make that fight twice before, he said no,” opined Usman. The champ revealed that he offered to fight Masvidal to try and help save UFC 249 when Khabib Nurmagomedov was forced off the card. “They tried to make that fight but Masvidal said no. And then he did an interview saying ‘oh well the numbers weren’t right’ and this and that. He’s been saying no. The only reason he took that fight on Fight Island is because there was a built in excuse. He was training the whole time, but he said ‘oh, I only had six days notice, so that’s why that went that way.'”

Usman envisions a scenario where “Gamebred” has no build in excuse next time. “Well guess what? I’ll give you a whole training camp. And this time, I will stop him.” 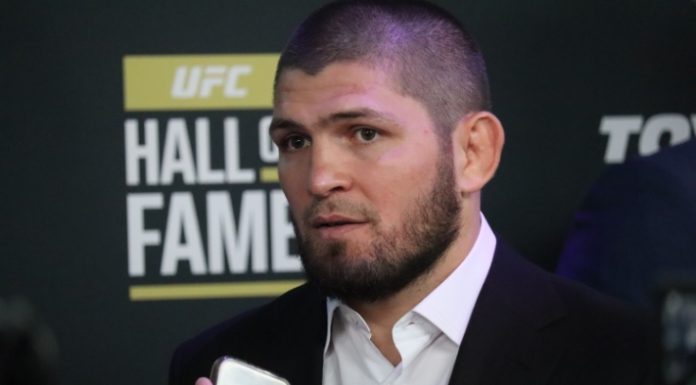