Devonte Smith got back in the win column at UFC Vegas 18, defeating Justin Jaynes in the second round via a doctor’s stoppage.

After going 1-2 to start his UFC career in 2020, “Guitar Hero” Justin Jaynes was looking to stave off the dreaded 0-3 slump on Saturday at UFC Vegas 18. In a 160lb catchweight affair, Jaynes was paired up with Contender Series veteran and heavy hitter Devonte Smith. Smith had yet to go the distance in a fight, with all of his contests, win or lose, ending via finish.

The forecast called for fireworks, in other words.

Smith started the fight by immediately backing Jaynes up to the fence. Jaynes was working in some low kicks and found a home for the straight left hand, but Smith was soon working his jab from the outside. Smith then began landing some kicks to the body, inside low kicks, and Jaynes began to have a tough time landing anything simply because he couldn’t get inside. However, Jaynes did land a shot with about 90 seconds left in the round, a huge right hand that briefly stunned Smith. Smith recovered and began stalking Jaynes along the cage wall once again, landing heavy jabs. Jaynes caught a kick near the end of the round, and Smith just unloaded on him to end the round.

Smith began the second round with a big takedown and landed in side control alongside the cage. Smith quickly moved to mount and then back mount, where he rained down blows and then moved to get the rear-naked-choke. Smith looked to have it in deep, but Jaynes was able to reverse position and get back to his feet. The referee then called time for the doctor to take a look at the eye of Jaynes, which was showing signs of swelling. A few moments later, and Devonte Smith was back in the win column.

Our featured prelim is called after swelling on Justin Jaynes's eye. #UFCVegas18 pic.twitter.com/8HrtyXZmSI 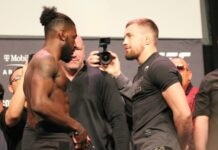 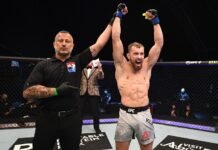 Ludovit Klein Steps in to Face Devonte Smith at UFC 272