Francisco Figueiredo lived up to his family name at UFC Fight Island 8, defeating Jerome Rivera by unanimous decision in his promotional debut.

The champ’s brother has arrived. Francisco Figueiredo, older brother of UFC flyweight champion Deiveson Figueiredo, made his octagon debut on Wednesday. The Brazilian, a flyweight himself, was paired up with Jerome Rivera early on the UFC Fight Island 8 card.

The family name would be the draw (the second time that had happened on Wednesday’s card, as Umar Nurmagomedov, cousin of lightweight champ Khabib, also made his debut). But Francisco would have to prove that he could hold his own under the bright lights of the UFC.

Figueiredo scored a solid takedown and Rivera responded by locking his legs in a body triangle, eventually working his way to his feet. Rivera fired some jabs, then closed in and was tripped, leading to a scramble. Rivera got to his feet and pushed Figueiredo to the cage hunting for a takedown, where the round ended.

Out in the open after a few kicks, Figueiredo clinched up with Rivera and took him down in the middle of the cage. Rivera had a tight guard, limiting Figueiredo’s progress on top. Rivera squirmed to the fence, and used that to stand up with a bit over a minute left. Figueiredo closed the distance after Rivera was skirting around the cage, clinching his opponent against the fence to ride out the round.

Rivera started the final round with a couple of kicks, two to the leg and one up top. A clinch battle ensued and Rivera overpowered Figueiredo to push him to the cage. Figueiredo reversed position and took Rivera down, but Rivera was able to get up quickly. Rivera started to pick up the pace as time was winding down, eventually landing a head-and-arm throw and getting a takedown by the end of the round. 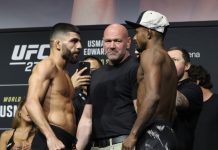