The UFC Vegas 16 main event had gone through a few iterations by the time it arrived on Saturday night. All of them involved Jack Hermansson, the Swedish middleweight ranked fourth in the division. Originally, however, “The Joker” had been paired up with Darren Till, in a potential title eliminator. When Till was hurt, Kevin Holland got the call — only to fall out of the fight due to a positive COVID-19 test. Which brought Marvin Vettori into play.

The thirteenth-ranked 185lb’er in the UFC, Vettori also became the first Italian to headline a UFC card with the promotion. And after calling out big name opponents ever since his fight with Israel Aesanya, Vettori had finally hooked the big fish he had long desired. Now, he just had to land him, in terms of earning a statement win.

Vettori’s first couple of left hands landed Saturday, while Hermansson fired off a low kick or two. The Italian kept the pressure on, mixing in an uppercut. While Hermansson fired back counters, Vettori had him covering up. A lot of heavy exchanges, at close range, led to a not entirely surprising result: Hermansson was knocked down, and Vettori moved in for the kill. Ref Herb Dean took a good look, perhaps thinking of stopping the bout, but Hermansson recovered, grabbing on to Vettori’s legs. Vettori gave up on ground n’ pound, switched to a guillotine, but wasn’t in position. He’d remain in control of the fight for the remainder of the round, but Hermansson was able to survive.

Hermansson came out firing his left, followed by a leg kick, early in the second. Nothing motivates like being down on the scorecards. Vettori landed again; Hermansson shot for a takedown, chaining a couple together before finally getting Marvin Vettori down. But the Italian immediately transitioned to the top, moving into guard. They’d eventually move back up, but Vettori certainly proved he could hang with the Swede on the ground. Already having the edge on the feet, that posed a problem for “The Joker.” Hermansson would initiate a clinch against the cage, landing a knee — but he was unable to get the fight down. Vettori would finish the frame connecting with a punch upstairs.

Another active start saw both men throwing to open the third. Hermansson fired off single strikes, including a heavy kick to the body. He then ducked a punch and latched onto a leg, but Vettori used a whizzer to keep things standing. Hermansson began to press forward towards the middle of the round, and cardio was likely to become a question the longer the fight went on. A closer frame in the third, with even Vettori’s corner telling him Hermansson had won the round.

Heading into round four, Vettori’s recent promotion/card switch weighed heavy. After originally training for a three round fight against Jacare Souza, would he have enough left in the tank should things go the distance? Hermansson landed several times early in the fourth.  Vettori was still very much in it, landing his left hand. But where Hermansson had wilted under that pressure in the opening round, he was very much standing tall, and often moving forward, trading with Vettori as the round (and fight) progressed. Hermansson connected with an uppercut, then a second one at the end of a combination as they approached the final minute of round four. Vettori answered back. He had his mouth open, breathing hard. Hermansson was far from looking fresh himself.

Just LISTEN to the intensity from the Vettori corner! 🔥#UFCVegas16 pic.twitter.com/e5SrP0fLp5

Jack Hermansson came out fired up early in the fourth. But Vettori was energized as well, after his corner lit a fire under him between rounds. It was coming down to who wanted it more — and both men were making a case. Both were landing, both were eating shot after shot. Vettori’s left hand continued to be on point. With two minutes to go, Hermansson began to turn up the heat. Vettori was under fire for a moment, but he regrouped, and wound up initiating a clinch. Hermansson rolled for an ankle in the final seconds, but Vettori was able to finish on top.

The scorecards gave it to Vettori, and there was no controversy there. The Italian finally got his chance to prove he belonged at the top of the weight class — and he did just that against a very game Jack Hermansson. 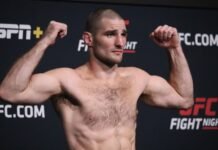