Jordan Leavitt was an undefeated Contender Series alumni making his promotional debut at UFC Vegas 16. With a baby on the way, it was a big night for Leavitt — a chance to secure his future. Welcoming him to the promotion, Matt Wiman, a 14-year veteran of the promotion looking to snap a two-fight skid. Wiman had endured a multi-year hiatus between 2014 and 2019, and was still looking for his first win since returning to the octagon last year.

The fight started off with Jordan Leavitt changing levels on Wiman for a double leg takedown attempt. He elevated Wiman as it looked as Wiman was alright with going to his back. Instead, Leavitt carried him to his corner, and put his left forearm across Wiman’s face to slam Wiman down. The result was a slam in emphatic fashion, knocking the veteran out cold.

Showing excellent sportsmanship, a clearly concerned Jordan Leavitt pulled back, not delivering a single follow-up strike. None were really needed; Wiman was out on impact. Quite the impression made in Leavitt’s UFC debut. And a finish that could very well win him a Performance of the Night bonus as well.

👑 @JoJo_MonkeyKing gets the SLAM KO, seconds into the bout! 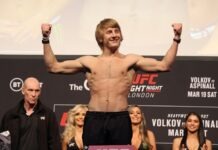 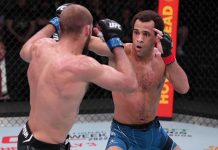 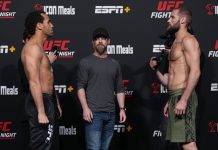 Welcome to the UFC: Trey Ogden