While any number of fighters have dropped a weight class or two to gain an advantage in the cage, UFC Vegas 16’s Gian Villante and Jake Collier are two fighters who have gone the opposite direction in recent years. Villante, better known as a light heavyweight, and Collier, once upon a time a middleweight, faced off in heavyweight action to open the card on Saturday — the first of three December shows to close out 2020 for the UFC.

Collier’s transformation from a 185lb fighter to a heavyweight clocking in just north of 264lbs was shocking to say the least. Gian Villante’s move up was less striking, given he’d competed at heavyweight prior to his UFC run. But both men were in need of a win at UFC Vegas 16. Collier, in particular, needed to make up for a disheartening loss to Tom Aspinall earlier this year.

Plenty of kicks and plenty of leather were thrown early in the night’s only heavyweight tussle. Most of the offense early came from Collier, with Villante checking kicks, and countering while Collier landed his jab repeatedly. But it was Collier cut open first, a trickle of blood running down from his forehead, over the bridge of his nose. Villante found some success with his right hand, but Collier mixed things up, with high kick attempts, a liver shot, and a left hand that clipped Villante and sent him reeling. Villante escaped as Collier charged forward, but the message had been sent. Collier would connect once or twice more by the opening round’s end.

On wobbly legs!@JakeCollier88 stings Villante and continues to pile on 👀

Collier was still leaking blood to start the second round. He continued to mix up his combinations, stepping into his jab, going to the body, and working in leg kicks. Villante was answering at times with his own jab, but not often enough. Collier landed his left again late in the frame, but had slowed a bit, and Villante was able to eat a number of shots. Collier managed a spinning back fist in the final minute, but missed; Villante landed a more conventional combination a moment later.

Round three saw Collier find more success with his left. The round played out similar to the first two, with the pair going the distance. There were no surprises on the scorecards, with Collier earning his first UFC win as a heavyweight. 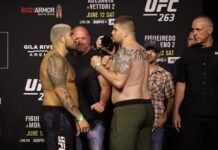 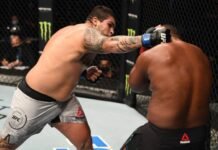