The third title fight for KSW 57 later this month is finally official.

Croatia’s Antun Racic (24-8-1) will defend his bantamweight title against Bruno Santos (9-1) at the event, expected to take place December 19. The card has two previously announced title fights in Phil De Fries vs. Michal Kita for the heavyweight title, as well as Marian Ziolkowski vs. Roman Szymanski  for the vacant welterweight strap.

Racic’s participation in the card was previously announced. However, the identity of his opponent was in question until KSW officials announced the news Friday.

Santos is the winner of four straight, and will be making his debut in the promotion at KSW 57.

The full card as announced to date can be found below. KSW 57 is expected to stream via KSW TV. 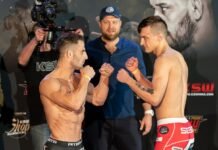 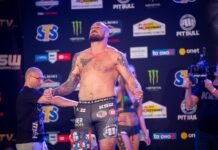