Las Vegas, NV — For some reason, Katlyn Chookagian entered UFC 255 a sizeable underdog against Cynthia Calvillo. She exited the PPV event with her hand raised.

It’s probably indicative of recency bias in a sport that is constantly obsessed with a fighter’s most recent performance, and who the big winner of late is. Calvillo made her debut in the flyweight division this year, and knocked off a top contender and former title challenger in Jessica Eye.

Chookagian? Yesterday’s news, right up until she wasn’t. Instead, she used a smart game plan, relying on her reach and constant movement, to just plain outwork Calvillo en route to a unanimous decision win.

“It was definitely easier than some of our sparring sessions,” Chookagian (15-4) said following the fight, referencing training partner Sijara Eubanks, who fights next month. And when it comes to Calvillo, there might be another reason she entered as the favorite: a record that isn’t what it seems at first glance.

“She hasn’t faced too many top-level fighters. A lot of her finishes are girls that are in the bottom of strawweight or have even been cut,” observed Chookagian. “It’s next level fighting. It’s easy to just bulldoze through someone when they’re inexperienced or scared.”

As to what comes next for Chookagian, the landscape at 125 probably dictates that she’ll have to play gatekeeper for a while. “Blonde Fighter” had her own title shot earlier this year, after all.

“Obviously, if anyone wants to get by Valentina [Shevchenko], they probably have to fight me first,” Chookagian said. “I’ve already beat Lauren Murphy, but I’ll do it again. It’s an easy paycheck. So whatever. I don’t care who I fight, I just want to stay active. And I have no injuries. I’ve had five fights in a year. So if I can keep that going on, I like that.” 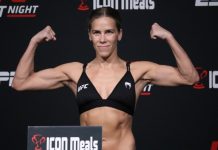