UFC 255 brings with it an anticipated light heavyweight rematch between Shogun Rua and Paul Craig.

After their first fight ended in a draw, both fighters were keen to revisit the match-up. But both were scheduled against other fighters. Shogun picked up a win over Little Nog. Craig defeated Gadzhimurad Antigulov. Now, the two will finally settle what Craig (13-4-1) sees as unfinished business.

“You know, you have a draw on your record, it means there’s unfinished business, and I believe that there is,” he told Cageside Press during the UFC 255 media day this week. “Straight after the fight, he said he wanted to run it back. I’ve been very vocal about running it back, and now we get to do that in Vegas.”

It wasn’t easy even getting to Las Vegas for the Scottish fighter, however. With a large part of Europe going back into lockdown due to the second wave of the coronavirus pandemic, travel became complicated.

“My flights were cancelled three times,” Craig revealed about the journey from Scotland to the U.S. for the event this weekend. There were no direct flights available, so Craig was forced to fly to Amsterdam, then Minneapolis, before arriving in Las Vegas.

But he’s here, ready to fight, ready to show that he has developed more as a fighter than former UFC light heavyweight champ Shogun since they first met. “I don’t see Shogun Rua as developing as much as myself,” said Craig. “When you’ve got hunger and you’ve got goals, I feel you develop a lot quicker.”

That’s exactly what Craig believes he has. And his conditioning, striking skills, and jiu-jitsu skills have all leveled up in the past year, Craig added. “Everything I do is always about improving myself. I believe Shogun Rua has made improvements, but I don’t feel he’s made the gains that I have.” 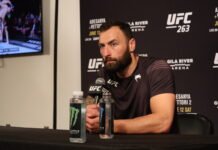