Undefeated welterweight prospect and Team Bodyshop rep Joey Davis returned at Bellator 253. Welcoming him back to the Bellator cage was a promotional newcomer in Bobby Lee. But while new to the promotion, Lee carried with him some solid credentials, having won interim gold in Cage Fury FC in his last bout.

Lee immediately went on the offensive Thursday, throwing kicks to the leg and body. The newcomer then opted to shoot on Davis, a rather glaring mistake given the level “Black Ice” had achieved in his wrestling career. Not surprisingly, Davis stuffed that takedown and converted one of his own. From there, a heavy top game allowed Davis to land a number of strikes on Lee, who at least tied up his opponent’s leg and fought the hands to keep things competitive. On his way back to his feet, however, Lee ate a big right hand among a flurry of strikes; that blow dropped him back down. Davis went in for the kill, but couldn’t finish it there.

🧊 @JoeyBlackIce is opening up early in his #Bellator253 bout tonight.

Catch the main card LIVE NOW on @CBSSportsNet in the 🇺🇸 and with @SkySports Mix in the 🇬🇧.#MMA #Bellator pic.twitter.com/oKltn5u6q3

Joey Davis had the fight down again early in the second. Lee employed a kimura grip to try to escape; when the did move back to the feet, however, they didn’t stay there long. Davis planted Lee on his back, and this time, moved into guard with half the round still remaining. He finished out the round in control.  And it was more of the same in round three. Davis’ wrestling was too much, his top came was too much, and Bobby Lee finished the round on his back.

Combined with his undefeated collegiate wrestling career, Davis is quickly becoming one of the biggest bright spots in the sea of young talent that Bellator has acquired in recent years. 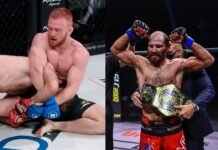