A pair of hard-hitting light heavyweights have been added to the UFC’s December 19 card.

Ryan Spann and Misha Cirkunov have been added to the Fight Night event, per a report by MMA DNA. The fight will be the first in over a year for Canada’s Cirkunov, while Spann competed more recently, last fighting in September.

Spann (18-6) will be looking to get back on track, after his eight-fight win streak was snapped by Johnny Walker at UFC Vegas 11. It was the first loss in three years for the 29-year old, who previously held gold in LFA.

Cirkunov (15-5) is 2-1 in his past three fights, but has not competed since September 2019. That fight saw Cirkunov earn a submission win over Jimmy Crute at UFC Vancouver.

The UFC’s December 19 date is expected to take place at the UFC Apex in Las Vegas, Nevada. A welterweight fight between surging prospect Khamzat Chimaev and top contender Leon Edwards tops the card. The full list of bouts revealed to date can be found below. 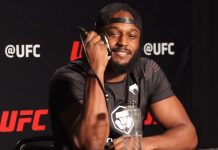 UFC Vegas 54: Ryan Spann Wants Time Off to Work On “Mental Side of Things”