Tony Gravely utilized his strong wrestling to limit the attack of Geraldo de Freitas, who pushed hard for a comeback at the end of their fight at UFC Vegas 14.

Highly-touted prospect Tony Gravely was seeking his first win in the Octagon at UFC Vegas 14 against Geraldo de Freitas, who was attempting to bounce back from a loss. Gravely stood out in New England promotion CES, defending their bantamweight belt twice. He appeared on the Contender Series last year, winning by third-round TKO to earn a contract. He fell in his debut in January against veteran Brett Johns.

De Freitas entered the UFC as the Shooto Brasil bantamweight champion. A win over Felipe Colares in his promotional debut extended his win streak to seven, but a split decision in his last fight ended that run.

De Freitas started the contest with a heavy dose of combinations, then went for a clinch takedown. On the way down, Gravely manuevered his way to top position, landing in half guard. De Freitas muscled his way into butterfly guard and was able to stand up from there. The aggressiveness on the feet for de Freitas continued when they returned there, cracking Gravely with a left hand. While wobbled, Gravely shot for a takedown and got the Brazilian down on the second effort. He wasn’t able to rest, though, as de Freitas attempted an armbar, then an omoplata. Gravely avoided both and stood up while de Freitas stayed down, kicking his opponent’s legs a few times before re-entering guard. Another submission attempt was avoided by Gravely, who promptly stood up. Right before the end of the round, Gravely threw de Freitas to the ground to secure another takedown.

The second round started with de Freitas landing a strong straight punch. Gravely initiated a clinch and de Freitas attempted a takedown that allowed Gravely to take his back in the clinch. They eventually separated and de Freitas connected with a pair of kicks before rushing in for a takedown and getting thrown on his back by Gravely. An omoplata was attempted by de Freitas, who used it to spin out from his back and stand up. After eating a jab, Gravely scooped up another takedown, this time a single leg. They returned to the feet quickly, only for Gravely to land another solid takedown, his fifth of the contest.

The third round started with smooth striking from de Freitas, but that only lasted as long as Gravely allowed it, as he brought the fight to the ground again. He landed in half guard this time, limiting de Freitas’ defensive options. He got back to guard, only for Gravely to force his way back to half guard. The Brazilian shrimped out and stood up with just over two minutes left. Gravely landed a body kick, but ate a strong right straight that sent him right back to his wrestling. The cage helped de Freitas stay on his feet and a combination landed. De Freitas emptied the tank and sprawled on several takedown attempts, before Gravely finally got him down with a double leg. They returned to the feet with 10 seconds left, where they traded a slew of punches and Gravely landed a trio of heavy right hands over the top as the fight came to a close. 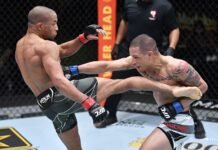 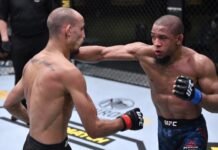