Las Vegas, NV — Facing an opponent who came in badly overweight, Jason Witt made a statement at UFC Vegas 12.

In a bloody battle with Cole Williams — the blood primarily sourced from a nasty cut on Williams himself — welterweight Witt (18-6) dominated with emphatic takedowns and vicious ground n’ pound. It was Witt’s first win inside the octagon, improving his record there to 1-1.

Despite the gore (rather fitting for Halloween), Witt didn’t mind the blood. “I cut him, and I hoped he just kept bleeding until he stopped fighting,” he said during the post-fight press conference afterwards.

In fact, while blood tends to complicate grappling battles by adding some slipperiness, this time out, it actually helped. “We were pretty close against the cage. And usually it’s a little bit harder to slide my arm in,” explained Witt. “But with that blood, it just slipped right in, and I just squeezed.”

Williams missed weight by a sizeable amount for the fight. Not that Witt seemed to mind. “I could care less. Give me that free money.,” he said “I should up and made weight, and you’re giving me an extra 4800 dollars? Let’s go.”

Witt also revealed that he “got 40% of [Williams’] purse.” That’s a figure that is curiously higher than usual. “He missed weight twice in a row,” observed Witt. “So I think that’s why they upped it a little bit. I was hoping it was the Israel Adesanya, the 90%. But it didn’t work out that way.”

Middleweight champion Adesanya has suggested fighters who miss weight should cough up the bulk of their purse. Apparently, Witt is a fan.

“I’m perfectly okay with free money. I told my wife, I’m buying you a new purse for Christmas. She said ‘you get that much? I’m getting a nicer purse,'” he joked. 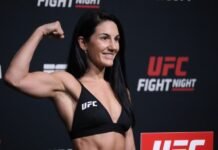 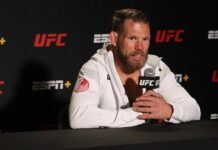 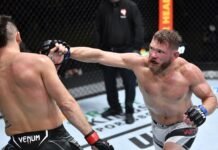