ONE Championship featherweight champ Martin Nguyen is one of four fighters defending his belt at Inside the Matrix on Friday.

Nguyen (13-3) has been paired up with Thanh Le at the Singapore-based event. It’s a fight that Le himself suggested could spark a rivalry. But “The Situ-Asian” doesn’t quite see it that way. “He’s just another opponent on the list. It’s my job to take him out, defend this title and move on to the next,” he told Cageside Press during the Inside the Matrix media day this week.

Le stands out among his fellow prospects thanks to a 100% finish rate. He’s never gone the distance in a three round fight, win or lose. He’s also never been in a five-round bout, something Nguyen has experience with.

Nguyen said this week that he’d love to take Le into deep waters. “100%,” he said. If he gets the chance, of course. “We’ve studied everything about Thanh Le. There is no game plan, it’s going in there and purely showcasing my skills and doing what I do best man,” said Nguyen, “and that’s laying hands on my opponent. But in terms of Thanh Le, his record and everything like that, I think the longest he’s been is like two minutes and 35 seconds in the second round. I’d love to take him to the deep waters if it gets there. For me, it’s up to myself to do my job from the get go, from that first round.”

If he secures the win Friday, don’t expect Martin Nguyen to go back to dabbling in other weight classes. Nguyen once held the ONE lightweight title, and made an attempt to hold three belts by moving to the promotion’s bantamweight division as well.

“This is my legacy man. The featherweight division is where I belong,” stated Nguyen. “Going up a weight division to fight at lightweight doesn’t motivate me. Going down a division at bantamweight still doesn’t motivate me. There’s only one fight that I’ll go down for, it’s the one fight that I realistically thought I’d won.” That would no doubt be against Bibiano Fernandes. The pair met in 2018, with Nguyen losing a split decision. “At the moment, everything is at featherweight for me and that’s where I feel good, that’s where I feel safe and healthy, and at my best.”

Watch the full ONE Championship: Inside the Matrix media day session with Martin Nguyen above. 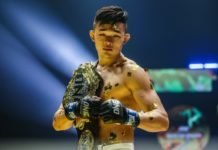