Abu Dhabi, UAE — After months of waiting, Magomed Ankalaev and Ion Cutelaba finally had their rematch at UFC 254 on Saturday. And it was Ankalaev walking away with a thunderous knockout win.

To recap, the pair first met at UFC Norfolk last year. The fight was stopped early, waved off by a ref who believed Cutelaba to be out on his feet. One problem: Cutelaba had been playing possum and was firing off a punch when the ref stopped the bout.

Speaking to media outlets including Cageside Press following UFC 254 in Abu Dhabi, Ankalaev (14-1) said there was nothing personal with Cutelaba. “This is just sport, and there was a premature stoppage last time around. So I wanted this fight really bad.”

So did many others. One of the worst calls of the year resulted in the rematch being immediately rebooked. But the bout was pushed back again and again, as a result of the coronavirus pandemic, and a pair of positive COVID-19 tests by Cutelaba.

At one point, Ankalaev was even paired up with Ovince Saint Preux. But when that fell through as well, it was Cutelaba from there on out. Even though Anklaev realized the match-up wasn’t going the right way by the second and third cancellations. “People were waiting for this. They were writing in comments, and all over the internet,” he observed. “And so this meant so much that I just decided to wait it out, and it all came together.”

Of course, Anklaev is thrilled with the final result. “I’m obviously very happy winning tonight. I had very long training, and I finally made it,” he said Saturday. “So I’m very, very happy.”

Next up, the Dagestani light heavyweight has a couple of names in mind. “There’s a lot of guys I want to fight. Shogun Rua, Anthony Smith. Maybe any of the top five would be good, if they want to fight we me of course,” he said. As to why names like Shogun and Smith interest him in particular, Ankalaev pointed to their veteran status. “They’re veterans in the sport. They fought many times, and they’re well known.” 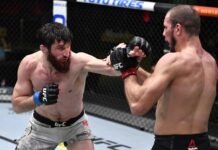 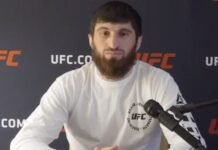