The UFC will be back in Las Vegas on December 19 and headlining the card will be top prospect Khamzat Chimaev against third-ranked contender Leon Edwards.

Khamzat Chimaev continues his siege on the UFC and he’s drawn one of the most talked about but inactive fighters in the welterweight division, Leon Edwards.

Appearing on The Jim Rome Show on Friday, Dana White announced that the promotion had come to terms with Chimaev and Leon Edwards on a bout at 170 pounds. ESPN later reported that the fight will headline a card at the UFC Apex in Las Vegas on Dec. 19.

Chimaev has been one of the most active and talked about fighters this year with a 3-0 record in the last four months. His last fight, a middleweight bout against Gerald Meerschaert, ended with a 17-second knockout. That showed off a new side of his game, as he dominated his first two UFC opponents with overwhelming grappling.

Edwards has not fought since July 2019 when he earned a decision win over Rafael Dos Anjos in San Antonio, Texas. The third-ranked welterweight fighter had recently been removed from the rankings due to inactivity, only being reinstated with this fight announcement.

Edwards was supposed to headline a London card against former UFC welterweight champion Tyron Woodley before the coronavirus pandemic forced the cancellation of the card and many future cards after.

Since then, it’s been reported that Edwards had turned down a fight with Stephen Thompson, seeking a grudge match against Jorge Masvidal or a title shot. A win over one of the most popular fighters in the UFC could get the job done for Edwards in December. 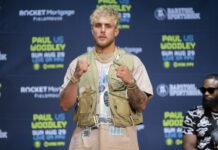