Jimmy Crute had an impressive performance at UFC Fight Island 6, knocking out Modestas Bukauskas with a crushing counter-right in the first round.

Jimmy Crute was looking to test just how legit Modestas Bukauskas was at UFC Fight Island 6. Crute has fought several well-known light heavyweights in his four appearances in the Octagon. He’s stopped Paul Craig, Sam Alvey, and Michal Oleksiejczuk with the lone loss coming two fights ago against Misha Cirkunov.

Bukauskas signed with the UFC as the Cage Warriors light heavyweight champion on a six-fight win streak of all stoppages. That continued in his promotional debut against Andreas Michailidis in July, in which elbows late in the first round caused a stoppage in between rounds. He is 11-2 in his career heading into the fight with all but one of his wins ending before the final bell.

Crute shot for a takedown right out of the gate that brought the fight to the fence. While Crute was trying for a takedown, he hit Bukauskas with a knee below the belt that paused the action temporarily. The fighters traded leg kicks, then Crute countered a Bukauskas body kick with an overhand right that knocked his opponent down. Bukauskas got to his feet, but was off balance and was hit with a left hand that turned the lights out.

🇦🇺 @CruteJim with a STATEMENT on Fight Island.

[ Co-main next on #ESPNPlus ] pic.twitter.com/oYx2sffumR

Crute jumped over the cage to pay a visit to Dana White, who told him that the knockout earned him a $50K performance bonus. Crute followed up the fight with a call-out of Nikita Krylov, who is currently without an opponent after Volkan Oezdemir pulled out of their expected bout. 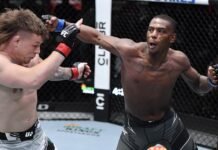 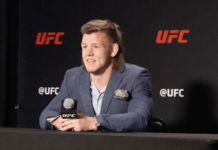