Entering her third weight class in the UFC, former strawweight champion Jessica Andrade was looking to find a new path to gold at UFC Fight Island 6 — while still keeping an eye on her old home at 115lbs.

Ahead of the event, where Andrade was paired up with Katlyn Chookagian, Andrade spoke of potentially fighting Valentina Shevchenko — while also telling Cageside Press that she believed a rubber match with strawweight foe Rose Namajunas could transpire soon.

Chookagian, meanwhile, had gone up against the champ just two fights back. After rebounding with a win over Valentina’s sister, Antonina Shevchenko, the number one ranked flyweight hoped to add a former champ’s name to her resume.

That wasn’t to be come the pair’s co-main event bout on Saturday.

Andrade, as always, looked like a bull, compact and powerful. She was swinging early, closed the distance, and put Chookagian up against the fence. From there, she planted the taller fighter on her back. Chookagian would make it back up, but it was mere moments before they were in a clinch again. Knees and stomps peppered the Brazilian’s attack. In the open, a low kick took Chookagian off her feet.

It took a while, but Chookagian got her hands going. However Andrade’s replies were more powerful, more accurate, and led to a big slam. Andrade landed in side control, landed a few shots, then trapped Chookagian in a guillotine as they got back to the feet. As they broke from that, Andrade landed an uppercut right to the bread basket. The gut punch drew an immediate reaction from Chookagian, who quickly retreated. Andrade charged forward, came up short on a knee, then drilled another punch to the stomach, which crumpled Chookagian.

SHE'S COMING FOR THE BELT 🏆

🇧🇷 @JessicaMMAPro stops the No. 1 contender in ONE ROUND.

[ Main event next on #ESPNPlus ] pic.twitter.com/WTpWE2lSlD

With the win, Andrade announced her presence at flyweight, without question. And while she may still have eyes for “Thug Rose,” after her performance on Saturday, who wouldn’t want to see her go up against Valentina Shevchenko? 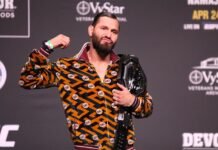 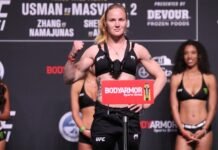 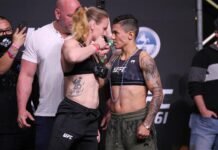