A historic night for France, and for Bellator MMA, takes place Saturday, when the promotion puts on the first legal mixed martial arts event in the nation’s history. Split into two presentations, Bellator 248 and Bellator Paris (Bellator Europe 10), the show features two headliners, in Michael Page vs. Ross Houston, and Cheick Kongo vs. Tim Johnson 2.

Kongo and Johnson first met in 2018, with France’s own “The Darkness” finishing his fellow UFC alum in little over a minute. Houston, a former Cage Warriors champion, meanwhile, was making his promotional debut against Michael “Venom” Page.

The action all goes down Saturday at the Accor Arena. Weigh-ins for the show took place at 5AM ET, and streamed online. Results are below. 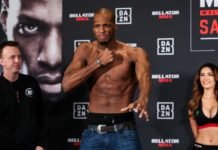