Ali AlQaisi takes on Tony Kelley at UFC Fight Island 5 this weekend. The bantamweight bout goes down in Abu Dhabi, on the heavily promoted “Fight Island.” To visit Yas Island is something that creates a sense of euphoria in AlQaisi — the UFC’s first fighter from Jordan.

“I’m so excited. I’ve fought three times before in Abu Dhabi. I feel like home. I have a lot of people I know there. Like I’m from Jordan. I’m from Middle East so I’m going to fight in my home,” AlQaisi told Cageside Press recently. “So I can’t wait.”

This is Ali AlQaisi’s sophomore effort in the octagon and he definitely learned some lessons from that UFC debut defeat. “What I learned from the first fight especially is don’t leave the fight for the judges. It was a great experience. It was different a little bit without the audience… I feel like the fight was for me but it is what it is. The fight’s finished right now and we’re looking for what’s next.”

Recent preparations for this bout have taken place with the people who have brought him to the dance with some Las Vegas amenities put into the mix a bit.

“I’m working with my head coach from Jordan. I have here training partners and I’m going to different gyms for boxing, for grappling, but here I have specific MMA training,” explained AlQaisi. The includes the Performance Institute in Vegas. “It [UFC PI] was great. I hope to get back there next fight and training there was good.”

His opponent at UFC Fight Island 5, Tony Kelley, is someone that Al-Qaisi has a measure of respect for, but he also kept things brutally succinct when breaking the fight down. “Sure, I watched the last fight for him. It was a good performance. Tony is a good fighter but I don’t think it will be a good day for him.”

Ali AlQaisi is clearly a proud compatriot of Jordan and is concurrently helping to grow the sport in is country as his own athletic career blossoms.

AlQaisi has the chance to be the first fighter in the history of Jordan to secure a UFC victory. Tune in for your chance to witness history on ESPN+ on Saturday, October 10th.

The full interview with Ali Al-Qaisi can be found in the link provided. 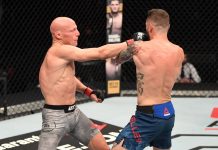