To say it was an upset was an understatement. “I just knocked off one of the top prospects in Bellator, so I couldn’t be happier,” said Leary, speaking in a post-fight press scrum. At 17-11-1, Leary isn’t exactly a household name. In fact, he’s flown under the radar “a little bit,” he agreed.

“To be honest, I feel like my whole career has been under the radar. I started off well, and got really sloppy in my career, so my record’s never looked that great,” Leary admitted. “But if you look deep into my record, I’ve got some great fighters on there, some great wins. I made some mistakes early on in my career, and I feel like it’s always kept me under the radar. I’ve been the underdog for quite a lot of my fights, and I come out on top.”

This fight, however — on live TV in the U.K. and free online for fans around the globe — might finally change that. “Thank you for Bellator, putting me up on the main card. I have to thank Kiefer, because it’s on his back for taking the fight against me,” an elated Leary said later. “Everyone knows I’m a tough fight, no one really wants this fight, because they look at it like, ‘he’s the underdog, blah blah blah,’ and he took it anyway.”

“I think he learns from this, he comes back stronger,” he added when it comes to Kiefer Crosbie, one of Bellator’s budding stars. “But I think I just proved how good I am.”

The only downside to the fight was how the stoppage came about: a doctor’s stoppage after a wild first round. “It’s disappointing obviously. It’s got to be disappointing for him, he’s never been stopped, and you can argue that’s not a genuine stoppage,” acknowledged Leary. “Obviously it’s disappointing for me, because I don’t want any question marks, ‘would he have carried on if you hadn’t cut him?’ and this and that. The fact is, I cut him. So I done the damage that does that. But I know how disappointing it is for him.”

If Bellator allows it, Leary, now 3-2 in the Bellator cage, is open to a rematch with Crosbie. After that first round, it’s hard not to be excited for that prospect. 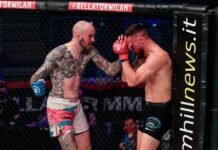