Bellator 267’s Charlie Leary saw a boost in his profile as he rode a wave of momentum following an October 2020 win over the high-profile Kiefer Crosbie.

At the time, Crosbie had just a single loss in his pro fighting career. Leary won the pair’s match-up via doctor’s stoppage, leading to calls for a rematch — to which Leary would gladly have obliged.

Instead, Crosbie went on to lose his next fight, and exited the promotion shortly after. Leary, meanwhile, sat on the sidelines while the coronavirus pandemic dragged on.

“To start with yes,” Leary (17-11-1) told Cageside Press when asked if he saw a bump in profile following the Crosbie win. “I think the lockdowns and stuff absolutely just killed it.”

Leary, who returns to the cage this Friday against Benjamin Brander, admitted that the circumstances following his big win “sent me into a bit of a depression to be honest, because I was just starting to get some recognition, I was having a lot of interviews, things were progressing, and then all of a sudden we got locked down again. And it just kind of put me on the back burner. Everyone forgot about me.”

Now that things are moving forward in the MMA world, he noted, “no one’s really talking about me anymore. So I felt like it had started, but I think I’ve got to go out there and prove I’m up there in this fight, and everyone will remember that then.”

Luckily, neither the lockdown nor depression impacted his preparation for Bellator 267 too greatly. “For this fight it was okay. I was back in shape and training pretty well for this fight. One of the lads was fighting a few months ago, so I was helping him prepare and stuff like that,” explained Leary. “So I wasn’t too bad for this fight. But over Christmas and the New Year, it impacted me badly. Really badly. I was depressed, got out of shape, a bit fed up, pretty much like everyone I think.”

Having his wife and kids supporting him helped him realized that he needed to “knuckle down and get back in shape, and push to make this worthwhile.” Leary’s coach and team were there for him as well, “they dragged me out of any sticky situations and depressions quite easily.” But there were further hurdles when their gym wouldn’t let them train there, despite pro athletes being given the green light to train during the lockdown.

Luckily, one of his teammates found them a place to train, albeit out of town. “A lot of traveling, a lot of hard work, a lot of hours to get the training in, but it was worth it,” the English lightweight stated. But despite all the time away and hurdles, Leary sees a silver lining. “I feel like I’ve improved. I really do feel like I’ve improved.” 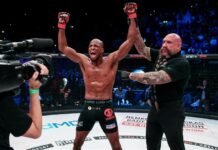 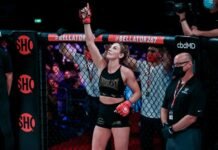