Fighting in 2020 has rarely gone as planned, which puts combat sports in sync with the rest of the world. That proved true once again Thursday at Bellator 247 in Milan, Italy, with a main event of Denise Kielholtz vs. Kate Jackson hastily promoted in the wake of Paul Daley falling off the card a day prior.

The Daley vs. Derek Anderson fight truly was a loss, especially given the event was the first on Bellator’s new home of CBS Sports Network. But the new main event certainly had some fireworks, as Kielholtz (6-2) took all of 43 seconds to finish former title challenger Jackson.

The Dutch kickboxer has now won four straight, and is eyeing a title in MMA to go alongside her Bellator kickboxing title. And she’s willing to take part in a women’s flyweight grand prix to do so. That’s a concept promotion head Scott Coker has been toying with of late.

“For sure, for sure. I think Scott Coker, he makes women’s MMA. His ideas in women’s MMA [have made] women’s MMA big,” Kielholtz told Cageside Press after the fight.

“You can see what he’s accomplished in history. He made women’s MMA,” Kielholtz reiterated. It’s pretty clear she thinks highly of the boss. “So if he thinks a tournament is good, for sure I’m in. I believe every word that Scott Coker has, because he knows how to bring women’s MMA to the next level. And I think a tournament would be amazing. Having all those killer women in one tournament, I think that would be great. We will see what Scott Coker has next for us.”

Whoever, be it champ Ilima-Lei Macfarlane or not, she fights next, Kielholtz would one day love to fight at home in the Netherlands. “I think, [it’s] not only my dream, but the dream of many, many MMA fighters in Holland who are waiting for Bellator to come to Amsterdam,” she stated. 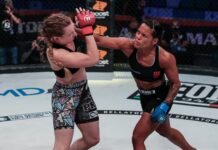 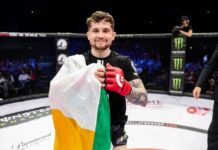 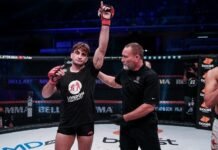