Nearly two years removed from winning The Ultimate Fighter 28 at heavyweight, Juan Espino finally returned to the octagon at UFC 253.

His fight Saturday night was just the eleventh of his career, which at 39 years of age is a snail’s pace. He turned pro in 2009, but really didn’t fight at a consistent pace until 2017. Won TUF 28, then was out from November 2018 until this past weekend.

Staying motivated hasn’t been easy, but Espino explained post-fight that he’s a positive guy. “I work every day on my motivation. The life is not easy. Every day I wake up, I do the fight,” he said, referring to his training. “Every day is focused on my training. Sometimes more, sometimes less.”

Calling fighting in the UFC his “dream,” the heavyweight added that he felt very good in his return. “Maybe the first moment, I didn’t have the distance,” Espino admitted, noting “this guy is a very dangerous striker.”

With a scarf-hold choke on Jeff Hughes in the first round, Espino might have made it look easy. “A fight is a fight,” he stated, reiterating that Hughes, who trains with heavyweight champ Stipe Miocic, was a tough opponent. “Maybe my level is different.”

Espino is focused on the top 15 moving forward, he told Cageside Press on Saturday. And if possible, he wants to fight again soon. Even on Fight Island in the next few weeks. “Yeah sure. Dana [White] I am here. Please give me another fight!” he exclaimed. 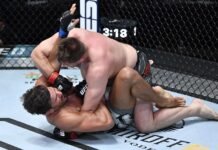 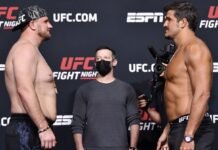