“In my eyes, I didn’t lose,” Price explained following the event, backstage at the UFC Apex. “It ain’t an L. It’s a D. No one wants a D, but… you know what I’m saying?”

Are we seriously not doing phrasing anymore? Maybe Price isn’t an Archer fan. In any case, back in the opening round, Price actually thought it would be an early night. He came storming out of the gate, and had Cerrone under heavy fire.

“I thought I was getting out in the first 30,” admitted Price. “I caught him with a few clean combos, and I saw blood, I saw his eyes rolling, I saw him stumble a little. So I was like ‘okay, I’m going to catch this right— not here. Not here. Not here.” And the end never came. Cerrone regrouped, and fought on, making it a closer fight than it looked early. A point deduction for eye pokes wound up being the deciding factor in a draw being awarded.

Aside from the eye pokes and not getting the win, Price called it a “glorious fight” for him.

“I grew up watching this man, and I try to base my career off him, be a sportsman like him,” explained Price. “I want to be a good ol’ down home boy.” The type that goes for a beer with an opponent after they fight. Although, Price noted, he doesn’t drink.

When it comes to Cowboy, what Price respects is “his sportsmanship, man. You saw us, we high-fived after every round and hugged the third. I ain’t never hugged a man I’m about to punch in the face in the third round,” he exclaimed. “Normally I’m like ‘I’m going to kill you.’ But it’s Donald Cerrone, he’s smiling at you, I can’t get mad at someone smiling at me! I’m like ‘what’s up?!'”

Price, like Cerrone, is down to run the fight back. “100%. Heck yeah. That’s a main event right there, me and him. You saw what we did in the co-main.”

Price claimed that the stare down between him and Cerrone was overlooked in some of the media coverage surrounding UFC Vegas 11. “They forgot me and Cerrone? How are you going to forget about us? But we opened your eyes in there tonight, you won’t ever forget about us fighting again. And next time, we’ll have our own card.”

Of course, Dana White has hinted at having the retirement talk with Cerrone. But it feels somewhat unlikely that retirement is in the immediate future for Cowboy, so a Price rematch remains on the table. 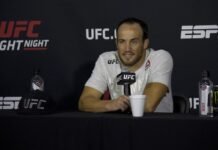