After four years away from the octagon, Damon Jackson made a triumphant return Saturday at UFC Vegas 11.

Jackson (18-3-1, 1NC) found himself embroiled in a heated scrap with Mirsad Bektic, after stepping up on short notice to fill in for Eduardo Garagorri. He made the most of it, submitting Bektic early in the third round. Jackson picked up a Performance of the Night bonus for his efforts.

Ahead of the fight, Jackson was looking for opponents. Not necessarily just in the UFC, although he certainly jumped at the opportunity when it came. But what might surprise some is Jackson’s decision to cut out certain aspects of his training. “What I did, that I never do, is that I cut out wrestling and jiu-jitsu about a month before, because I was scared to death of getting COVID, or being around someone that had COVID,” Jackson admitted. “I was like, freaking out.”

Of course, a COVID-19 diagnosis would mean not fighting. And not getting paid.

Instead of practicing with his team five or six days a week, it was just two days a week for Jackson. “I was in a lot more of a cardio mode. A lot of weights. I think that’s kind of what hit me tonight, going for those and not having the same forearm strength and conditioning.”

In his time away from the UFC, Jackson never considered the idea that he’d never make it back. But at the same time, “I was definitely blown away by some guys that I saw get pulled in,” he said. Jackson went on to add that “I understand that at the end of the day, it’s a business. They’ve got to bring in the guys that are most exciting. To think they’re going to bring in the same people over and over and over, it’d be foolish. So you had to come out and really step up your game, and change the way you are, or just deal with it.”

“In no way, shape or form did I want to go to any other promotion,” he added. The goal was always to return to the octagon. “I’m just happy to be back. Be back in this promotion. This is where I belong. If I had a full camp, I would have finished [Mirsad Bektic] in the first 30 seconds when he shot in. He shot in like a huge wrestler, he shot in with his hands wide, with his head right in front of me. It blew my mind.”

Given how heated things got in the fight, he’d also be willing to run it back. “I never had a grudge match, but that dude, he really pissed me off when he got in my face. If he wants to go it again, I’m ready to go,” said Jackson. 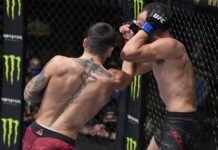 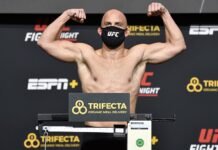