Poland’s Jan Blachowicz is ready to move on from Jon Jones. Putting that into words Tuesday during a virtual media session, he told Cageside Press simply that “I don’t care Jon Jones right now. He doesn’t exist for me anymore.”

Fair enough. Blachowicz (26-8) was the man widely expected to face Jones next, for the UFC’s light heavyweight title. Then, Jones opted to vacate his title, with a move to heavyweight in the works. Instead, Blachowicz was paired up with Dominick Reyes at UFC 253, with the vacant title on the line.

The reality, of course, is that Jones’ shadow looms large over the upcoming light heavyweight title fight, the first without Jones or Daniel Cormier since March of 2011.

Dominick Reyes, however, is just as dangerous an opponent, judging on his last fight. Reyes lost a razor-close split decision to “Bones,” in a fight that many felt “The Devastator” had won. Not, Blachowicz, mind you — he admitted Tuesday that he scored the fight for Jon Jones.

One of the more interesting storylines ahead of Reyes vs. Blachowicz at UFC 253 later this month has been Reyes vocalizing his dissatisfaction with the timing of the fight. Simply put, he feels six weeks isn’t enough time to prepare for a title fight.

Jan Blachowicz doesn’t necessarily agree. “We’ve got the same time to prepare ourselves,” he pointed out. “I don’t care, I’m ready. I was on my training, so I don’t care. For me, six weeks, it’s enough. I’m going to be ready, for sure, 100%, for this fight.”

Asked whether he thought that perhaps Reyes’ head wasn’t where it should be ahead of such a big fight, Blachowicz countered with the idea that it might be mind games. “Maybe this is his game, some psychology game for me. I don’t know. We will see at the fight,” he stated. “I will be ready, I hope he will be ready also. I don’t want any excuse after the fight. That’s it. We’ve got the same time. I’ve got six weeks, he’s got six weeks, so for me, it’s not a problem. I’m happy, I’m excited, I cannot wait to step into the octagon and start punching him.”

Leading into the bout, Blachowicz has been getting strong support at home. Including from former strawweight champ Joanna Jedrzejczyk, who went as far as to say she’ll be waiting at the airport when Blachowicz returns to Poland.

Blachowicz is a former KSW champion, so he’s been in big fights before. This, however marks his first UFC title fight. Still, “I know how it tastes. I cannot wait to start fighting against Dominick Reyes,” Blachowicz exclaimed. At the same time, however, he’s trying to maintain his composure. “I don’t want to put more pressure on my head. I know what I’m fighting for.” So the focus is strictly on his preparation and training. Not the belt — that comes after.

As to the dangers that Reyes presents, Blachowicz explained that those lie in “everything that he’s got in standup.”

“He’s a south paw, really good kickboxer. His standup is really dangerous,” said Blachowicz. “Good cardio, really strong, if you take him down he stands up really good. So that’s going to be the most dangerous.” 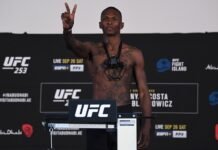 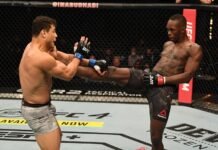