Hawaii’s Ty Gwerder waited nine months for his second shot at a win in the Bellator cage. At Bellator 246 on Friday, he made the most of it.

Gwerder (5-1) earned a third-round knockout over George Tokkos in the fight. A pandemic-era opportunity that “Savage” was ready to jump on.

“As soon as COVID gave us a chance to really get back in the gym and have somewhat of a schedule, I was pedal to the metal,” he told reporters during Saturday’s post-fight press conference.

Gwerder also stayed on his manager, and Bellator matchmaker Rich Chou, to find him something. Ready to step up at any opportunity. He got one. “I’m just grateful to be here. It was perfect timing,” said Gwerder.

On the fight itself, Gwerder said that “He was tough. I hit him with some pretty hard shots. I was actually surprised he was wobbled when he was. I knew I landed a good shot, but I didn’t think it landed as clean as it did. As soon as he got up, I was like ‘alright, kill shot, let’s go.'”

And despite a bit of time away, Gwerder felt just fine in the cage Saturday. “Honestly I don’t really believe in the whole rust thing. It’s all in your head,” he suggested. “If you feel like you’ve got rust you’re going to perform like you’ve got rust.”

Empty venues during the coronavirus pandemic have been giving fighters the ability to hear their corners clearly for a change — but that’s less of a factor for Ty Gwerder, apparently. “I’m really in tune with my coaches, I can hear them clear as day, whether it’s a lot of noise or not,” he said. “I heard everything they said tonight.”

With his first win in the promotion under his belt, the former LFA fighter said what’s next is “whatever the boss wants to give me. I’ll take one ASAP.” As to who, “I would take anybody, honestly, it doesn’t matter,” he added. “I’ll earn my stripes and work my way up the ladder.” 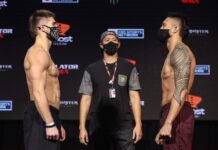