Daniel Madrid began his MMA career nearly 15 years ago. He’s fought UFC level athletes like Ian Heinisch and Seth Baczynski, the latter of whom he submitted in LFA last year. He’s fought all over the world, and was supposed to battle Impa Kasanganay for the LFA middleweight title in March.

The coronavirus pandemic put a stop to that. Kasanganay went on to win his way into the UFC on the Contender Series. Madrid, meanwhile, signed a short-term deal with Bellator MMA, and was lined up for a high profile fight with Austin Vanderford.

Then the coronavirus struck again, hitting Vanderford and wife Paige VanZant, forcing Austin out of his fight with Madrid. So instead, Daniel Madrid faced Pat Casey at Bellator 246 on Saturday, earning a split decision — and admitting afterward that the scoring had him a little confused.

“I knew I had done enough. A blind man could see that I won that fight,” he noted.

Still, it was good to get back in the cage, he said. “There were no nerves, there was nothing, it just felt like I was home. That’s where I’m at, I’m home.”

If he didn’t look quite like his usual self Saturday, chalk it up to a different approach. “I’m known as a jiu-jitsu person. If you look at my record, 14 of my wins come by submission. So I wanted to showcase my striking, I never get to,” he told reporters in person and online at the Mohegan Sun Arena. “I’m thankful for Pat, for multiple reasons, but I’m thankful he wanted to stand up with me.”

He hopes the performance is enough for Bellator to bring him back. “I believe [it is]. I put on a show, I did enough significant damage to him. I think I can put on some more exciting fights in future.”

And one of those could be against Vanderford. “If that’s what they see fit going forward, then absolutely,” Madrid said when asked about re-booking that fight. “I wish him the best. I heard through social media that he had caught COVID again. I hope he has a speedy recovery. Until then, I’ll just await what Bellator has to say for me.”

If there was one bone of contention for Madrid on Saturday at Bellator 246, it’s that he didn’t get a stoppage. He had his chances, had Casey hurt at least once. “I was a little disappointed that I didn’t finish, in regards to putting him down,” Madrid admitted. “But honestly I hit him with a couple straight rights and a couple straight lefts, he shook his head a little bit and I was like ‘okay, we’re in it for the long haul.'” 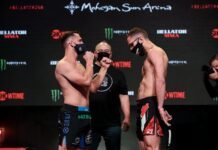