Just a week ago, in the fifth installment of DWCS 2020, Knight earned himself a shot at the UFC proper. Now, it’s Nchukwi’s turn — despite being just 3-0 and not having fought since defeating Knight.

Jackson-Wink MMA product Phil Hawes will also compete Tuesday night. “Megatron” appeared on the Contender Series back in 2017, and while he came up short there, he hasn’t lost since, putting together three straight wins split between Bellator MMA and Brave CF.

Undefeated prospects are always worth keeping an eye on, especially when they’ve hit double digits. That’s the case for Aliaskhab Khizriev, with a 12-0 record entering the night. While the level of competition Khizriev faced early in his career was underwhelming, his last victory came against a name UFC fans will be very, very familiar with: Rousimar Palhares. Khizriev not only escaped with his leg intact, but managed to finish the Brazilian within a minute via ground and pound. That step up in competition coupled with an unblemished record have many observers high on his chances at a strong future in the UFC.

As always, the action gets underway at 8PM ET, live on ESPN+ (UFC Fight Pass internationally). Check back for results as the night unfolds.

For his part, Aliaskhab Khizriev wasted no time taking down Henrique Shiguemoto, and quickly took the back, locking in the rear-naked choke. Claiming the win in under a minute, the middleweight (who has also fought at welterweight) couldn’t have done much more to secure a UFC deal.

Drako Rodriguez clearly got the memo. Securing his own submission win with a triangle, he put away Mana Martinez in under three minutes. Martinez was locked up tight enough that he went to sleep before he could tap.

Phil Hawes got it as well. A big right hand sealed the deal, knocking down Khadzhi Bestaev with follow-up strikes a mere formality.

Church vs. Blackledge wound up being the first fight on week six of the Contender Series to leave the opening round. Blackledge’s takedowns were the story early. That, and low blows. Early in the second, the action was halted by by a low knee on Church. A second knee went upstairs, adding insult to injury. Or just more injury. Church opted not to take the full time allotted for recovery, and was soon in danger again. However, this time it was Church landing low, with a kick to the cup. When the action resumed, Blackledge earned another takedown, working in some shots to the body and head. Blackledge would press hard in the third, and while he couldn’t get the finish, he controlled to the bell, earning the decision win.

Nchukwi vs. Matavao was about the clearest example of power vs. speed you’ll find in modern MMA. Nchukwi frankly dwarfed his opponent, landing by far the more powerful strikes. But Matavao was willing to throw, and when he did, he threw a lot. He was rocked early, however, and grazed by a kick later in the round. That or the follow-up punch opened up a small cut.

Nchukwi didn’t take much time in the second, flooring Matavao early with a heavy head kick. Matavao was down for a while after that kick, but did recover and sit up under his own power. 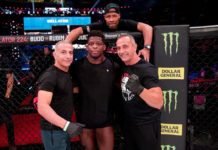