Starting with LFA 90 on Friday night, a number of prospects are in action throughout the weekend. Which stand out most? We’ve got you covered. It’s time for another installment of the Weekly MMA Prospect Report.

Lazishvili won the Georgian Championship in Grappling 6 times in 3 different weight divisions (61kg, 66kg, and 77kg). He also won the Moscow Open tournament in Grappling (66kg). In 2014 he took second place in the amateur World Championship (WKF) in Czech Republic, and in 2015 he became World Champion by Kombat League version in Italy. Other than his last fight, his competition has been lacking, but still, a 12-0 record is impressive nonetheless. He’s got excellent wrestling and can fight at his wrestling-heavy pace all fight with solid cardio. He fights Ricky Steele (6-0).

Steel is a karate fighter and he reps that style well. He has solid kicks, that are more than just powerful, and he covers distance very well. He attacks the legs often and then goes to the head, always throwing with absurd quickness. Steele does well at keeping his opponent at range using a lot of sidekicks and oblique kicks and he moves in and out very quickly without taking much damage at all. Along the way Steel has shown to have some solid takedown defense. He fights Zviad Lazishvili (12-0).

Mando Gutierrez is only 4-0 as a pro but went 7-0 as an amateur winning a few titles as well. He’s impressed with his aggressiveness and the pace he’s able to put on. On the feet, he’s usually bull-rushing forward but does have some kicks in his arsenal. He’s usually striking/kicking to close the distance to get the takedown. Mando wants the fight on the mat to show his slick jiu-jitsu. Even off his back, Gutierrez is very dangerous with fluid hips helping him attack submissions and scramble. He has a smooth back take and has a knack for finishing with a choke. Mando is a big submission threat and seems to have good cardio which is surprising with the amount of pressure he puts on early. He fights Mo Miller (3-0).

Miller has a background as a wrestler being a three-time All-American at Notre Dame. Of course, Miller has good wrestling but he does have some bright spots on the feet. He throws a good one-two and his right hand is dangerous. Miller has the style to go far with his patient but technical approach on the feet and some solid wrestling to fall back on. He fights Mando Gutierrez (3-0).

McPadden went 9-1 as an amateur winning the Driller MMA Amateur Bantamweight Championship. Outside of MMA, he has won many first-place medals in grappling. McPadden is a jiu-jitsu guy with three of his four pro wins by submission. Even as an amateur, McPadden has multiple submissions wins. The 25-year-old likes to use kimura locks and rear-naked chokes, and is best described as a flow-focused grappler. He fights Allan Begosso (3-0-1).

Argueta is fighting on the LFA prelims but is still someone to no doubt watch for. I am not fully sold on him as he is still green. He’s very wild on the feet and is one-dimensional. Argueta is aggressive right at the bell and will get easy takedowns. Once on top, Argueta is a big submission threat with three pro submission wins. He has solid jiu-jitsu and is a fast starter with all finishes coming in the first round. He fights Jackson Filho (3-1).

Aliev isn’t the most exciting fighter but he is a dominant one. With not much on the feet, Aliev is an excellent wrestler. He’s always pressing forward looking to time his entrances. Once on top, Aliev has heavy top control and active ground and pound and solid grappling. He’s not really a finisher but has a solid gas tank to easily go three rounds. He fights Abdurakhman Alimagomedov (9-0).

In his 29 wins, Ali Bagov has beat opponents like Bubba Jenkins, Eduard Vartanyan, Leandro Silva, Herdeson Batista, Khusein Khaliev, and current UFC fighter Ramazan Emeev. Bagov is totally a grappler/wrestler. He doesn’t have much on the feet, but his ability to close the distance and level-change to get the fight to the mat is quite smooth. His nickname is “The Hulk” and it suits him well as he is very strong and tough to get away from when he gets a hold of his opponents. Bagov’s jiu-jitsu is slick as displayed by his 22 wins by submission. His submission threats are complemented by heavy ground-and-pound. He fights Murad Abdulaev (19-7).

Vartanyan has been fighting at a high level in Russia for quite some time. His losses have come primarily to good competition, and he’s also beat some quality opponents as well. He holds wins over Magomedrasul Khasbulaev, Sergey Khandozhko, Alexander Shabliy, and Alexander Sarnavskiy. Vartanyan is an excellent pocket striker, counter striker, solid wrestler, and is tough as nails. He fights Mukhamed Kokov (15-4).

After coming up short in his pro debut, Kurban Taygibov rebounded winning ten consecutive fights in a row now. The Russian is pretty well-rounded with a methodical but dangerous approach on the feet and a strong wrestling base with a Sambo background. On the feet, he throws a good one-two but often throws single strikes. He gets away with it because of his hand speed and explosiveness. Taygibov has excellent shot selection and precise accuracy. Although he only has four stoppages he’s still dangerous. Taygibov can wrestle just as well but conserves his energy much better on the feet. He has solid takedown defense but off his back would be his biggest weakness. He fights Ramazan Kishev (15-3).

Askhab Zulaev is another legit up-and-coming Russian prospect. On the feet, he is excellent at distance using a range of kicks, even spinning kicks, often. The Russian is a skilled kickboxer with explosiveness, falling in love with his flying knee. Some other nice qualities he has are solid cardio given the pace he throws at, and excellent takedown defense. Zulaev has some decent wrestling, but his ground and pound is cutting with the elbows he throws. He fights Zhorabek Tesheboev (7-0).

Solely a grappler, Magomedov is well versed on the mat. A tall flyweight standing at 5’9″ he uses his length well. With a strong jab, his length is more useful to him on the mat. He’s really good in transitions taking the back consistently. A bit green still but he is a really slick grappler. He fights Goga Shamatava (15-7) who is a good test.

Yoo does have a 13-second finish on the feet but is more so a wrestler. Yoo is pretty aggressive on his takedowns. At times he won’t get the takedown on the first attempt, but he’s good at reshooting and getting it down. Yoo has exceptional transitional grappling and has excellent ground and pound. He’s good with transitions and is good at striking his way to a submission. He fights Sung Joo Hwang (2-5).

While I’m not fully sold on him, Amiran Gogoladze is only 22 and seems to be progressing quite well. On the feet, he’s ended fights with his hands and by kick(s). He utilizes a lot of feints, relying on his speed to hit the target. Gogoladze’s biggest issue is his takedown defense but it is a blessing in disguise. He’s at his best on the mat even off his back. He’s a big submission threat with only three submissions but all three he’s finished with are different subs. He fights Pavel Kusch (23-7). 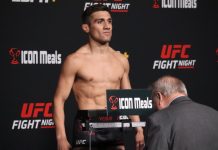 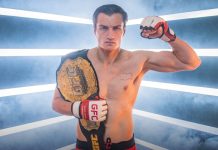