ONE Championship’s next card has been announced, and it will be a six-fight offering airing on September 11. A New Breed II will be headlined by Muay Thai action, as Pongsiri PK.Saenchai Muaythaigym will drop to bantamweight. There, he will take on Sean Clancy, who will be making his ONE debut.

In the co-main event at A New Breed II, #2-ranked flyweight contender for both kickboxing and the Muay Thai, Superlek Kiatmoo9, will face Fahdi Khaled. The kickboxing bout will be a chance for “The Gladiator” Khaled to steal Superlek’s ranking.

Also in action, “Supergirl” Jaroonsak Muaythai, still just in her teens, will face Milagros Lopez in a catchweight Muay Thai bout. Supergirl is the younger sister of Wondergirl Fairtex, and had amassed 40 bouts by the age of 16.

ONE Championship: A New Breed II is set to feature the following fightss:

Per ONE Championship’s official website, all bouts were previously recorded in Bangkok, Thailand. 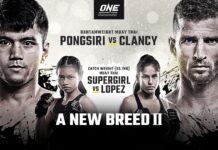 ONE Championship: A New Breed II Results and Video