ONE Championship’s latest offering, A New Breed II, airs Friday morning. The pre-taped action is the second event of the month for the promotion, and went down in Bangkok, Thailand.

As with previous ONE Championship events during the pandemic, A New Breed II is a six fight hybrid card featuring both MMA and single-discipline action. The event is headlined by what is being billed as a “special World Champion versus World Champion showdown,” with Thailand’s own Pongsiri PK.Saenchai Muaythaigym facing off with Ireland’s Sean “Clubber” Clancy in Muay Thai action.

The first two bouts of the card will air on ONE’s official Twitter and Facebook pages. The full event can be found via the ONE App and on Youtube (embed above), excluding regions where broadcast restrictions apply.

Full results from the A New Breed II can be found below. 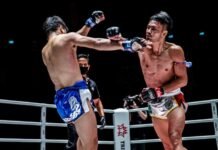