The UFC’s Halloween card has one heck of an interesting clash of styles lined up. That’s with featherweights Andre Fili and Bryce Mitchell facing off.

The striker vs. grappler battle was first reported by MMA Junkie.

Mitchell, always a threat on the ground, is one of just two fighters in UFC history to pull off a Twister inside the octagon. The Arkansas native (13-0) remains undefeated in his career after joining the promotion off a stint on The Ultimate Fighter 27. In the UFC thus far, he’s picked up wins over Bobby Moffett, Matt Sayles (with said Twister), and Charles Rosa, a fight that Mitchell absolutely dominated and came close to finishing.

Team Alpha Male’s Fili (21-7) will enter the fight off a win over Charles Jourdain, and on a 3-1 stretch over his past four fights. Nine of “Touchy” Fili’s wins have come by KO/TKO, with his last submission victory taking place in 2012, outside the UFC. Fili himself has been submitted twice inside the octagon.

The UFC’s October 31 card does not have an official location announced. The event currently features the following bouts: 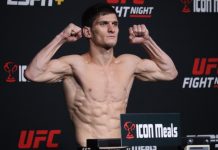