RIZIN 24 will take place next month.

On Wednesday, RIZIN Fighting Federation announced following a press conference in Japan that RIZIN 24 would take place on September 27 in Saitama at the famed Saitama Super Arena. Once again, the event is expected to feature spectators in the stands, although in a limited capacity and with enhanced safety precautions. Athletes will also be tested, as the coronavirus continues to hamper sporting events, and everyday life, around the globe.

Only a single fight was announced Wednesday for the RIZIN 24 card: Kickboxing prodigy Tenshin Nasukawa (37-0) will take on Osaka’s Kouzi (28-13).

Nasukawa, still just 22-years old, has been one of RIZIN’s breakout stars over the years. That resulted in the youngster being booked into an exhibition boxing match with boxing legend Floyd Mayweather on New Year’s Eve 2018. The bout ended with Nasukawa’s corner throwing in the towel, after being dropped three times by “Money.” The spectacle was broadcast only in Japan, and heavily criticized as a farce, especially when it when initially positioned as Mayweather’s return to the ring. 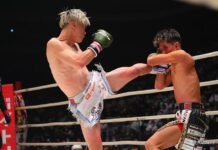