Las Vegas, NV — Mike Rodriguez was not expected to feature in the co-main event at UFC Vegas 7. But that’s where he found himself Saturday regardless.

The Lauzon MMA fighter had his bout with Marcin Prachnio promoted after Ovince Saint Preux was pulled from the card following a positive test for COVID-19. The result was a higher profile, and potentially a few more eyeballs on Rodriguez as he knocked out Prachnio thanks to some good clinch work, setting up the finish with an elbow.

That was all part of the plan, he told media outlets including Cageside Press following the fight. “Elbow or knee. But it was mostly getting into the clinch,” Rodriguez admitted.

“I knew my clinch was way better than his, so I knew if I put my clinch on him, he wasn’t getting out. I was going to put him out,” he continued. “Even if his momma was there, I was putting him out.”

Rodriguez (11-4, 1NC) was noticeably the larger man in the cage on Saturday. And he admitted to putting on a few extra pounds before the fight was signed. “I was heavy. When I first got the fight, I was walking around like 250,” he revealed. “That was video games and wings, that was pretty much all I was doing during COVID.”

Rodriguez dieted down, and entered fight week around 217lbs.

As for the video game comment, you might remember that Rodriguez had previously given up gaming. “I did quit video games back when I fought Milstead in Milwaukee, but this time around, one, with the pandemic, there was nothing to do,” he explained. “And two, I started streaming. Once I started streaming, I was like ‘this is the movement now, for COVID.’ I didn’t know what was going to happen with the fights and everything. I just had to do something to keep sane.”

During the fight, brief as it was (official time — 2:17), UFC analyst Dominick Cruz suggested a nickname change for Rodriguez. Rather than “Slow” (he’s anything but), Cruz came up with “Methodical” Mike Rodriguez.

“I like that!” Rodriguez exclaimed. In any case, whether it’s “Slow” or “Methodical,” Rodriguez also wants to be active. While he doesn’t have anyone in mind for his next fight, “I just want to get one more fight before the year ends,” he said. 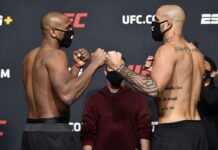 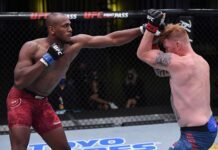