In rare cases, however, a fighter gets a second look. And in even rarer cases, a third shot. This series will examine those.

Jamie Pickett was on the very first episode of the Contender Series when he took on Charles Byrd in the summer of 2017.

During the opening seconds and minutes of the round, Charles set the tone of the fight with some absolutely brutal leg kicks that went largely unchecked by Pickett.

At one point during the first round, Pickett was able to secure a single leg takedown and *almost* took his opponent’s back. However, Byrd was able to return back to his feet after a minute utilizing the cage and without Pickett being able to truly take advantage of his positioning.

Trip after trip to the mat and time after time Pickett’s opponent found a way to his feet with the two ultimately ending up in a scramble at the end of the round.

After his attempt at an armbar was foiled, Picket found himself flat on his back, fatigued from a hectic first round, and his opponent raining down strikes upon him. Byrd was able to transition to an arm-triangle choke during the last 10 seconds of the round and choke Pickett unconscious.

After losing to Charles Byrd on the first season of the Contender Series in 2017, Pickett took a year from pro competition.

Pickett returned in May of 2018 to take on 12-8 Cristhian Torres.  Pickett looked fantastic against Torres, and forced the doctor to stop their fight in the very first round, due to an eyelid cut he inflicted upon his opponent.

After the Torres fight, Pickett would wait until February of 2019 before taking his next fight. Jamie fought Elijah Gbollie Jr. , who at the time was 5-6, and was able to force the referee to stop the fight in the first round due to strikes.

Just a month shy of the two year anniversary of his first DWCS appearance, Pickett appeared back in the UFC Apex octagon to take on the undefeated Punahele Soriano.

Pickett looked a lot more comfortable on his feet. Jamie was effectively utilizing his reach by repeatedly landing his jab as well as utilizing a lot of movement in order to stay out of range, pick at his opponent and avoid a dangerous firefight with Soriano.

However, a couple of flurries between Pickett and his opponent towards the end of the first round had Jamie in a little hot water.

The second round brought more of the same, jabs and movement until Soriano was able to take down Pickett. Once Pickett was able to get to his feet the fight started to open back up, with Jamie finally being able to land some shots on his opponent, who was beginning to fatigue, before being taken down again at the end of the round.

Jamie’s opponent was able to take him down again at the beginning of the third round and inflict a decent amount of damage.

Save for a small submission attempt, Pickett wasn’t able to get much else going from on the ground and finished the round still trapped on the bottom. When the scorecards came back, Jamie had lost a unanimous decision victory in his second chance fight on DWCS.

Both of Jamie Pickett’s former DWCS opponents Charles Byrd and Punahele Soriano were picked up by the UFC immediately after their wins on the show.

Charles Byrd competed again on the Contender Series in the month following his win over Pickett and was able to secure a UFC contract with another finish, this time in the second round over Randall Wallace. In his debut fight with the UFC, Byrd finished John Phillips in the very first round back in March of 2018. However, since then, Byrd has been finished three times, though each time was against quality opponents. Byrd has lost to Darren Stewart, Edmen Shahbazyan and Maki Pitolo while in the UFC.

Punahele Soriano made his UFC debut last year in the first fight of the night for UFC 245. Soriano got the finish, with a huge first-round KO over Oskar Piechota. Punahele pulled out of two bouts earlier this year against Eric Spicely and Anthony Hernandez resulting in cancellations.

The Road Back (Again)

After Jamie’s second Contender Series appearance he took less than three months off before he was back in the cage. This time Pickett faced off against 7-10 Jaquis Williams in a catchweight bout at 211lbs. Pickett absolutely dominated the fight with his multiple successful takedowns and smothering grappling in order to win a unanimous decision. It was a very smart and technical fight for Pickett.

Jamie also attempted to get back into the cage later on in 2019, but his bout against Rafael Celestino was canceled due to Pickett falling ill.

Jamie Pickett is a huge middleweight, and he was bigger than both of his former DWCS opponents. A massive 80″ reach really sets him apart from most fighters in the division and his last fight was at a catchweight of 211lbs.

Jamie has some excellent takedowns and grappling and knows how to bring a really dirty fight with clinch fighting and grappling intertwined with striking.

Pickett will be fighting 6-3 Jhonoven Pati, a man that also stands at 6’1″ tall. Five of Jhonoven’s six professional wins have come by way of KO/TKO. The man likes to throw hands and that could potentially be an issue for Pickett. Pickett has to utilize his huge 80″ reach while standing up by firing off his jab early and often. Jamie needs to secure the takedown in order to take the fight to the ground where he can ground and pound his opponent into submission as he has in past pro wins. 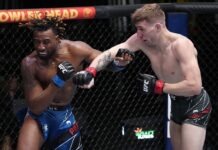