Las Vegas, NV — Following her debut win in the octagon at UFC Vegas 2 back in June, Mariya Agapova made something of a bizarre callout. Coming off a big victory, on a three-fight win streak, she called for a fight with Shana Dobson.

A fighter on an three-fight skid.

Agapova never wound up speaking to the media following that fight, leaving the story behind the callout something of a mystery. However she got her wish: the promotion booked the fight for UFC Vegas 7. Where it became a case of “be careful what you wish for,” with Dobson using ground n’ pound to finish off an exhausted Agapova in the second round. Despite being a massive underdog.

Speaking to Cageside Press during the post-fight press conference, Dobson shed some light into why the Kazakhstani fighter had targeted her.

“I think they offered me a short-notice fight with her at the beginning of the pandemic,” Dobson recalled. “With COVID and seeing people testing positive all over the place, I wasn’t in any hurry to go out there and get sick. I don’t think anybody had access to their coaches, training partners, gyms. I had to be smart about this.”

It was meant to be, as Dobson sees it. “I believe in fate, I believe everything happens for a reason, I believe we met when we were supposed to meet for a reason,” she stated. “And it worked out for me.”

Dobson knew she needed to get the finish the second time she took Agapova down. “This is money right here. This is easy work,” she recalled thinking. At that point in the fight, Agapova had absolutely burned herself out. It’s something Dobson and her coaches at Elevation Fight Team were expecting.

“We knew she was going to come out hot,” said Dobson, “and we knew I had to be calm and composed and use my experience.”

For her efforts, Dobson took home one of the evening’s Performance of the Night bonuses. That $50,000 will no doubt be a huge boost for the fighter, who is pursuing her master’s degree. She also likely saved her spot on the roster, improving to 4-4 and snapping that three-fight losing streak. 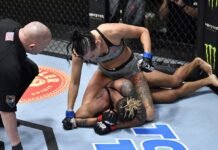