After pulling off what many saw as the Upset of the Year in 2020, Shana Dobson returned at UFC Vegas 19 this Saturday. Looking to make it two wins in a row, Dobson was paired up with Casey O’Neill — a promotional newcomer with a lot of promise.

O’Neill opened the fight aggressive, getting her hands going and changing levels for a takedown. When she couldn’t land the takedown, Dobson fired back with considerable power. But O’Neill, unfazed, repeated her initial attack, and this time, landed the takedown — if briefly.

Buoyed perhaps by that Upset of the Year performance against Mariya Agapova, Dobson stayed active, and in a clinch, landed a nasty looking knee to the body. O’Neill, however, quickly turned the tables, putting “Danger” Dobson flat on her back. Moments later, the newcomer was in side control, although she wouldn’t stay there long, instead moving back to her feet to try and find a way in on her opponent.

Later in the round, Dobson was still throwing hard — when she had a chance to get any offense off, that is. More often than not, it was Casey O’Neill in the driver’s seat, controlling on top, against the fence, and on the feet.

The first five minutes of Casey O’Neill’s career were solid. The second five minutes or less began with her taking the back of Shana Dobson. While the rear-naked choke wasn’t to be had, O’Neill made her way to mount, and elbows followed. Dobson covered, spun around, and tried to buck O’Neill off. None of the aforementioned approaches bore fruit. O’Neill remained on top, in mount, dropping elbows. When Dobson rolled, O’Neill took the back. Rolling again, O’Neill stayed tight to her, although she did take a pair of warnings for strikes to the back of the head. With no answer to the ref’s request to “show me something,” however, it was clear Dobson was done — and the fight was waved off moments later.

Welcome to the UFC @KingCaseyMMA! 🇦🇺

As UFC debuts go, O’Neill’s was a good one. 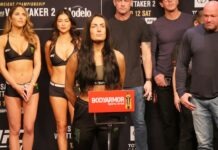