In the wake of Jon Jones vacating the UFC’s light heavyweight title, Bellator 244’s main event took on new meaning. Ryan Bader had long been the best 205lb fighter outside his old home, but on Saturday, he had the chance to prove that he was the best light heavyweight in the world.

While Dominick Reyes and Jan Blachowicz will battle for Jones’ old title shortly, neither have had the career run that Bader has. “Darth” Bader was a staple in the top five inside the UFC, and nothing changed when he moved to Bellator, beating the likes of Phil Davis and King Mo, and picking up a second title at heavyweight.

Like Daniel Cormier, Bader will likely always be compared to Jones, a fighter who defeated him way back in 2011. But since then, the standout wrestler has become a dominant force, and is unbeaten since 2016.

Opposite him on Friday at Bellator 244 was Vadim Nemkov, a member of Team Fedor, with a strong record and an urge to shake the prospect label. While he downplayed the connection, Nemkov had a chance not only to steal Bader’s shine on Friday, but to get revenge after Bader defeated Fedor Emelianenko in Belltor’s heavyweight grand prix.

It was Ryan Bader who landed first Friday night, the final punch of an early combination. Nemkov managed to slip in a couple of leg kicks, and forced Bader back. What followed was a solid back-and-forth on the feet, both men having some success — but with a minute and a half remaining, Bader fell back on his base and took Nemkov down. He wouldn’t stay down, however, leading to the round finishing on the feet.

The opening round of Bader vs. Nemkov was arguably the most opposition Ryan Bader had faced in two years. He tried to press the action early in the second, and was clipped at least once. An eye poke then halted the action, but Bader opted to take just a few seconds to recover. And back underway, Nemkov went right back to work, firing off a head kick that dropped Bader! Nemkov moved in for the kill, Bader covered up, but the ref gave him all kinds of time to recover. Bader would try to hold on, and did make it back to his feet. But he literally tried to run out of harm’s way, wound up tagged and went down again. The ref had finally seen enough, and Bellator had a new light heavyweight champion.

Improving to 12-2, Nemkov will have a way’s to go to prove he is truly the best light heavyweight in the world. But at least for one night, he proved he was the best 205lb fighter in Bellator, and given the competition, that’s saying something. 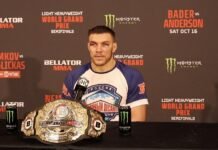