While Bellator has a big show on Friday with a handful of prospects back under the microscope, there are some international cards brimming with MMA prospects as well. Both home and abroad, watch out for the international talent this week!

Oniszczuk is a tall 170lb’er standing at 6’3″. He’s good at using his length sticking to the outside picking his opponents apart. He fights behind his kicks attacking the legs, body, and head breaking down his foes. Oniszczuk has a good one-two and mixes punches and kicks together well. Grappling-wise he’s a BJJ NO GI Polish Champion. There isn’t a lot of footage on him but he looks promising. He fights Mindaugas Veržbickas (16-7-2).

Jaleel Willis is quite athletic and a top-notch wrestler. On top, he has the control, the transitions, and the ground-and-pound to excel. Willis is everything you want in a fighter, especially in terms of wrestling. On the feet, he does hold a lot of power in his hands. Willis still has some things to learn but is a bright prospect. He fights Vinicius de Jesus (9-2).

Vinicius de Jesus is the current CES welterweight champion dethroning a top prospect in Jeremiah Wells. De Jesus is a Brazilian Jiu-Jitu black belt competing in the Combat Jiu-Jitsu Worlds 2019 as well. Despite being such a good grappler he’s no slouch on the feet. Jesus throws a lot of output and is super aggressive. He throws a variety of kicks like wheel kicks and sidekicks. A well-rounded fighter with a lot of upside. He fights Jaleel Willis (12-2).

Maximov outside of MMA has put in some time in wrestling and jiu-jitsu. He won the American Nationals for Gi/No-Gi at purple belt, was a National Junior College All American (3rd) at Clackamas community college, and has won multiple regional/state titles for jiu-jitsu as well. Currently 4-0 as a pro, Maximov went 6-0 as an amateur. There isn’t much recent footage but he has the hype behind his name. He fights Tresean Gore (2-0) in what is a solid test for both guys here.

Levy is a Karate and Kung Fu black belt and basically has been in combat sports since the age of four. Levy is a solid well-rounded fighter but is still an unfinished product. On the feet, you can tell he has that background in karate with his stance and tricky style. He’s an even better grappler who attacks submissions frequently. Sometimes he’ll lose position but is good at scrambling. The takedown defense needs work and his gas tank is improving. Other than that, he’s someone that needs to be on the MMA regional scene for at least another two years. He fights Ben Lugo (5-3) who is a good test.

Elder is a young kid at 23-years-old with a high ceiling. His level of competition as a pro is weak but he’s performed as expected. He’s at his best once on the mat and the wrestling to get there has been solid thus far. Elder has solid transitional grappling moving freely on top being very glue-like as well. He has good ground and pound that eventually leads to him finishing with a submission. Elder is also pretty good on the feet with good output and mixing in strikes and kicks together well. He’ll swing some looping hooks and that allows him to close the distance better. He fights Kegan Gennrich (2-1).

Nemkov is a three-time World Combat Sambo champion, with his only two losses to top MMA prospects Jiri Prochazka and Karl Albrektsson. Nemkov is very well-rounded, has solid wrestling and sound kickboxing on the feet. Nemkov uses the jab effectively and shows heavy hands with one-punch knockout power. He fights Ryan Bader (27-5) for the Bellator MMA light heavyweight title, which means he’s really shaking the prospect label and ready to arrive.

Moldavsky is mainly a wrestler. He knows how to effectively position himself for the takedown, whether that is in the clinch, where he is at his strongest, being able to control the position. Or if he just grabs a single leg for the takedown. On top, Moldavsky is as heavy as you can be as he is strong on top due to his background in Sambo. On the feet, he doesn’t go right for the knockout as he is more of a counter striker with a lot of power coupled with solid defense. Just a few adjustments would make him a complete fighter. He fights the well-known Roy “Big Country” Nelson (23-18).

Josh Hill is more so a veteran who only has losses to Marlon Moraes twice and Taylor Lapilus. Hill is a solid wrestler with good ground and pound and solid top control. On the feet, his leg kicks are arguably his best weapon. He’s gone the distance at times which has proven that his cardio is one of his stronger attributes. He fights former UFC fighter Erik Perez (19-7). We caught up with Canada’s Hill ahead of this one.

In Yaroslav Amosov’s stand-up, he combines his kicks and punches extremely well. He moves in and out fluidly with his punches and uses his reach well too. Yaroslav doesn’t have a lot of knockout power, but he is a finisher, finishing all but four of his wins. Amosov also has very good submission skills with nine submission wins, using his long arms mostly for chokes. He also has excellent takedown defense. He does need to work on his cardio though. He fights Mark Lemminger (11-1).

Lemminger is a wrestling-based fighter, and he’s a high level one at that, excelling on the regional scene. He is a physical powerhouse once he gets control in the clinch. He ragdolls opponents, making it look like a professional wrestling match the way he slings his opposition around. He doesn’t just rely on strength, on his takedowns he uses solid technique as well including inside trip takedowns, outside trip takedowns, and sweeping the legs out on his opponents – all beautifully done. On top, he has fight-ending ground and pound, staying active and always throwing while keeping full control. On the feet, Lemminger doesn’t usually stay striking, as he usually initiates the clinch, but he is getting better and better. He does hit hard, wobbling, and even dropping his opponents, but he needs a lot of refining in that department. He fights Yaroslav Amosov (23-0).

Don’t miss our chat with Lemminger from earlier this week.

After a pair of consecutive losses in 2017-2018, Sergey Romanov is on a current three-fight win streak. Hailing out of St. Petersburg, Russia, Romanov is a well-rounded athlete. He has a solid jab on the feet and mixes in slick combinations along with kicks and spinning attacks. He’s explosive as well which allows him to get off some strikes and bounce back out of the way. Romanov is good at getting takedowns from the clinch and has fight-changing ground and pound. He fights Sergey Kalinin (5-1).

Russian Sharapudin Magomedov is only 3-0 as a pro but has some good experience as he had a 15-1 amateur record. Magomedov has been very dominant thus far in his pro career especially with his ground game. He does have some heavy hands but is a much more dangerous wrestler/grappler. Magomedov is dominant once on top with excellent ground and pound and heavy position control. He fights Vyacheslav Svischev (2-0).

Khizriev was a bit unheard of until his last fight when he beat Bibert Tumenov who is a highly regarded prospect. On the feet, the Russian is a sneaky fighter throwing looping uppercuts, big overhands, and a front kick which he has finished with before. Khizriev has excellent endurance going three rounds no problem. He can be a grinder staying in the face and constantly shooting for takedowns. He fights Alberd Zhapuev (13-3).

Fighting out of Ukraine, Denis Bondar is an excellent 125lb’er moving up to bantamweight for this fight. Bondar fights with a grappling-heavy attack and boasts eight submission wins. He’s not as dangerous on the feet but does strike well to close the distance to get the fight down. Once on top he is very dominant with positional grappling, and flows on top winning the scrambles. He’s diverse with his submissions winning with a RNC, arm-triangle and an armbar. His gas tank may be an issue due to him exerting so much energy early on with his wrestling. He fights Kenan Jafarli (18-12). 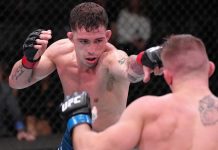 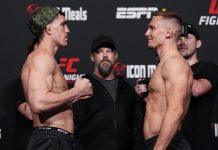 Welcome to the UFC: Evan Elder 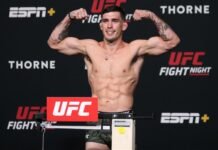 Evan Elder In Against Preston Parsons at UFC Vegas 52